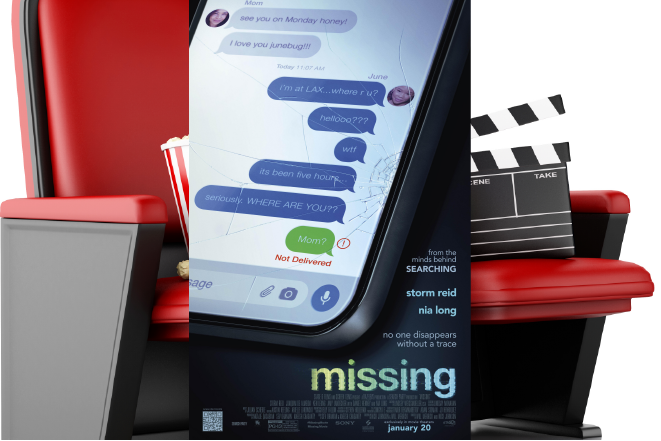 It never found enough of an audience to warrant a review from me, but I really liked "Searching" back in 2018. I would have given it a grade of B, maybe an A- if I was willing to look past some outstanding questions. The taut mystery-thriller followed a father's search for his missing daughter, with footage consisting entirely of whatever was showing on the father's computer screen - everything from photos and simple webpages to complex chats and video calls. The performances were heartfelt, the story took some interesting twists and turns, the eventual villain was smart and believable, and the ending made sense. Now comes sequel-of-sorts "Missing," another disappearance mystery featuring the same screen-based style. The performances are once again heartfelt and the story takes some interesting twists and turns, and... that's about the extent of my compliments.

June (Storm Reid) is a teenager whose mother Grace (Nia Long) goes on vacation for a week. She's not thrilled that her mom is going on an extended trip to Columbia with her lame new boyfriend Kevin (Ken Leung), but whatever, party time! But once the party's over and June goes to pick her mother up at the airport, things go awry. Neither Grace nor Kevin steps off the flight. Unable to reach either of them by any means, June soon files a missing persons report, but is frustrated by the FBI's slow progress. She decides to track down her mother herself from her home in Los Angeles.

June has the advantages of being smart and computer-savvy, but she's at a disadvantage because she doesn't speak Spanish and can't be physically present in Columbia. She hires local errand-runner Javi (Joaqium de Almeida) to do some investigating. He can't get security footage from the hotel, but he does find out that Kevin bought a padlock from a local hardware store. What was Kevin doing buying a padlock? Is this relative stranger in any way trustworthy? Will June ever see her mother alive again? There are many, many steps between answering the first question and the last.

For a while, "Missing" is just as compelling as "Searching." The performances from Reid and de Almeida are just as urgent and desperate as the ones from John Cho and Debra Messing in the first film. The story takes a similarly twisty path, though it rarely swerves into the unbelievable until the final act. And then, in a single dramatic reveal around the 90% mark, the movie falls apart. Obviously, I want to avoid spoilers, but I will say that there is a villain in play, and this villain is just awful. It's a terrible performance that doesn't match the tone of the rest of the movie, and at no point did I believe that this character was smart enough to mastermind the plan that they had apparently been pulling off perfectly until that point.

"Missing" is yet another promising recent thriller that can't quite stick the landing. I also wasn't crazy about M3GAN turning into a bland killing machine or "The Menu" not taking more time to play with its "food" (by which I mean victims). I don't want to take away from what this movie does right, which is a lot, but the viewing experience just plummets in the span of one clumsy shot. I still recommend the movie overall, as I've recommended plenty of mystery movies with great characters and setups that don't always pay off with pleasing logic. Heck, I've counted 1985's "Clue" among my all-time favorite movies, and that one has three disheartening endings. As for this movie, try to catch it soon, or you'll be "Missing" out on a pretty good time.

"Missing" is rated PG-13 for some strong violence, language, teen drinking, and thematic material. Its running time is 111 minutes.