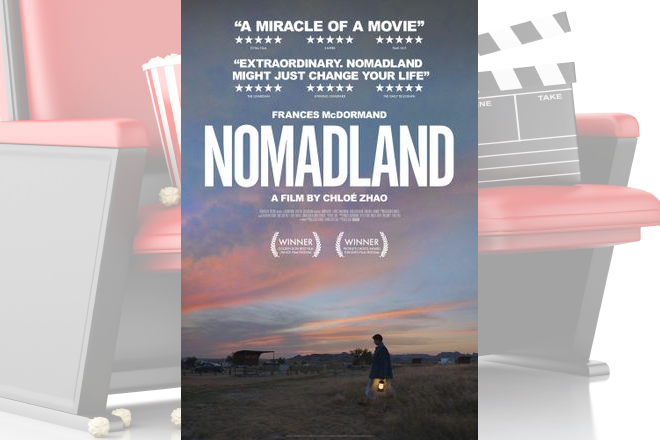 Since September of last year when the film won top prizes at both the Venice and Toronto International Film Festivals, it has been clear that Chloe Zhao's "Nomadland" would dominate awards season. Mind you, awards season itself was in question, with all the delays and compromises that affected all institutions in the last year. But whenever awards season was going to take place, "Nomadland" was going to be there to pounce on it and devour its many accolades. Now the film has opened, both in theaters and streaming on Hulu (try to see it in theaters if you can, though with my work schedule I had to settle for Hulu), and it's frankly it's not doing too well at the box office. But I have a feeling that things are going to change this coming weekend with the Golden Globe Awards, and even more in a few weeks when Oscar nominations are announced. People are going to want to see this film that is all over those programs.

The film follows Fern (Frances McDormand), a widow from a mining town so economically downtrodden, its zip code was recently decommissioned. Unable to find work and seeing little value in her house, she sets out on a new life living out of her van. It's no ramshackle operation - she makes it rather homey, given the circumstances - but nobody is going to mistake this thing for a full-scale mobile home. Characters throughout the film debate whether she should be counted as "homeless," and there's a good case on both sides of the issue.

There's no one central conflict or storyline to this movie, we're simply along for the ride with Fern as she bounces around from place to place. Other characters are almost entirely other nomads. There's David (David Strathairn, much more subtle here than with his usual broad/theatrical roles), who becomes Fern's boyfriend of sorts, convincing her at one time to move to a small town and become a waitress. Bob (Bob Wells) is the prophetic leader of the nomad community who sees the movement growing as the economy continues to tank. The film is set ten years ago, and one can't help but wonder how it will fare in this era, maybe even because of this movie. Swankie (a mononymous actress named Swankie) is a seasoned nomad determined to not let life pass her by. You may have noticed that most of these characters are named for their actors. Fern may very be well be short for Frances (it's got the consonants in the right order), and there's a quick mention of a reservation being under M-C-D.

As played by McDormand, Fern is a memorable character, but she's also incredibly relatable. Her van could be parked across the street from your house and you would consider her an unofficial neighbor. There's no swinging-for-the-fences Oscar baiting here, which ironically is what people respect about the performance and why they want to reward it. McDormand has a Best Actress Oscar all but in the bag at this point, and it's worth mentioning that I could also see Strathairn getting into the Best Supporting Actor race and maybe even Swankie for Best Supporting Actress.

Not much happens in "Nomadland" besides simple conversations and contemplative looks at scenery. Yet so much passion is put into every scene and shot that it seems like there's zero fat on this movie. It's like reading Shakespeare - it's probably not high on the list of things you "want" to do, but if you push yourself to take it in, you'll appreciate its brilliance.

NOTE: The film's R rating for "some full nudity" is a joke. There's about three seconds where Fern bathes in a lake. I highly doubt that any kid who can handle a PG-13, heck, PG movie can't handle this scene. While I don't realistically see many kids clamoring to see this movie, I don't think it should be disqualified from family viewing based strictly on its rating.

"Nomadland" is playing in theaters and available for streaming on Hulu. The film is rated R for some full nudity. Its running time is 107 minutes.