2013's "Pacific Rim" was a movie about giant robots called Jaegers that fought giant city-leveling monsters called Kaiju. Yes, the story was officially about the human pilots of the Jaegers and their quest to save the world, but the appeal of these movies has always been giant robots at war with giant monsters. Now comes "Pacific Rim: Uprising," a sequel where the Jaegers fight both Kaiju and other Jaegers, so... its existence is justified? 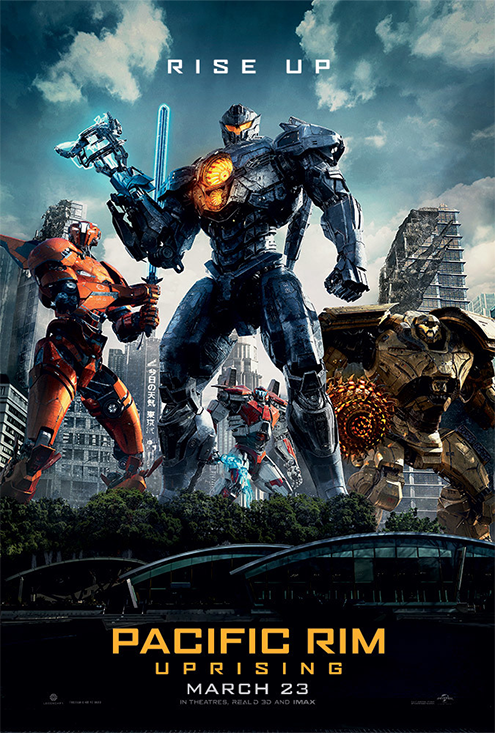 John Boyega stars as Jake Pentecost, the son of Idris Elba's character from the original. He's an incredibly gifted Jaeger pilot (a Jaeger master, if you will), but he had a falling out with his father and the military, and now he no longer applies himself, using his advanced Jaeger knowledge only to steal old parts to sell on the black market. A botched heist leads to him and an aspiring Jaeger pilot named Amara (Cailee Spaeny) fending off authorities for a short time in a makeshift Jaeger before getting arrested. Luckily Jake's adopted sister Mako (Rinko Kikuchi, returning from the first film) can get them off the hook if they join the military, with Jake as an instructor and Amara as a cadet.

Jake resents the military because everyone expects him to live up to his father's legacy, and because he has to work alongside former partner Nate (Scott Eastwood) after the two had a falling out over a girlfriend (Adria Arjona). The upside is that he might not have to be there very long. A corporation run by the shadowy Shao (Jing Tian) is building an army of drone Jaegers that could make human-operated machines a thing of the past. It seems as though Shao has finally figured out that robots so huge that they have to be operated by two pilots simultaneously might not be the most dependable defense system. Comic relief scientist Dr. Geiszler (Charlie Day) now works for Shao while former partner Dr. Gottlieb (Burn Gorman) works for the military. The two are shaken up following a mind-meld with Kaiju in the original movie, though Geiszler is coping much better than Gottlieb. The drones turn on humanity, leading Jake to lead the cadets in saving the world from both the drones and the returning Kaiju.

The film at least makes the right decision in having Boyega be the lead. He's funny, inspiring, and charming with a great accent. The rest of the cast is not so great. Eastwood continues his streak of being a bland bohunk, Arjona has no character besides giving Jake and Nate a reason to fight, and Spaeny pales in comparison to similar recent characters in "Logan", "War for the Planet of the Apes," and even "Transformers: The Last Knight". This is a franchise that wants to be a better version of "Transformers", so it can't afford to fall behind its reviled rival in any respect. Day and especially Gorman pull their weight as the scientists, though the film wastes what could have been a great third act for Day's character.

Watching "Pacific Rim: Uprising", I saw very little reason for the movie to exist. We have plenty of giant robot movies already, and having jaegers fight other jaegers doesn't exactly do much to up the ante. Only three characters from the first movie are back, were people really clamoring to see the continuation of their stories? The only thing that makes the movie somewhat relevant is that the original was directed by Guillermo del Toro, who here serves as a producer. Del Toro just won an Oscar for "The Shape of Water", so he's a hot commodity right now. Very little of his imagination is on display here, though I did come up with some "Shape of Water"-inspired off-color jokes about a character and their kaiju roommate. I can't say that I recommend this movie for del Toro fans, action movie fans, or even original "Pacific Rim" fans. The best I can say is that I recommend it for John Boyega fans.

"Pacific Rim: Uprising" is rated PG-13 for sequences of sci-fi violence and action, and some language. Its running time is 111 minutes.

Opinion: A market-based approach can...