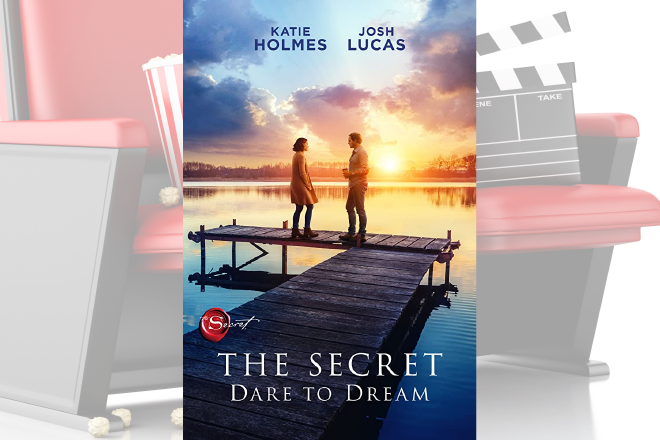 "The Secret: Dare to Dream" has lingered in prime real estate at the top of my On Demand system's Movies section for over two months now. Other movies have come and gone, but apparently this one remains popular. I know the book "The Secret" was popular about ten years ago, but I thought its heyday was long over. I guess the people behind this movie can be grateful that this happens to be an era where the competition is staggeringly underwhelming. Or maybe they focused really hard on achieving relative success.

It should come as no surprise that I'm not a believer in the philosophy of "The Secret," which (and I know I'm oversimplifying) is that positive thinking yields positive results. I suppose it can be effective in that can't hurt to not sabotage oneself with negativity. But I also know it's possible to get in over one's head with a positive attitude, so somewhere in the middle (otherwise known as "realistic") is probably healthiest. After all, life can't be that easy, can it? According to this movie, maybe it can be.

Katie Holmes stars as Miranda, a widowed mother of three in hurricane-prone Louisiana. Apart from the obvious, nothing is going her way. She's buried under a mountain of debt, her job is about to be greatly affected by a storm, her house is falling apart, one of her daughters' Sweet Sixteen party is getting upstaged, another daughter won't stop nagging her for a pony, and she has a toothache. Oh, and she just got distracted while driving and plowed into the back of Bray Johnson (Josh Lucas), a visitor from out of town.

Fortunately, Bray isn't as vindictive as, say, Russell Crowe in "Unhinged." He offers to repair Miranda's car, and later her house. He subscribes to the philosophy of "The Secret," and gets the family to subscribe to it as well, especially once things start going their way. Pizzas arrive at the house to spare them from a lousy beans-and-rice dinner, the repairs go better than expected, the daughter comes up with a great idea for her birthday party, and Miranda's boyfriend (Jerry O'Connell) proposes to her. Seriously, everything starts going right, like one ridiculous reward after another, to drive home the point that this philosophy supposedly works.

There are two additional twists to the movie, both involving the mysterious Bray. The first is that he has a connection to Miranda's late husband. He's actually in town to tell Miranda about it, but the right opportunity never presents itself (one time he allows himself to be interrupted by a microwave timer going off; try a little harder, buddy) and later there's a fallout with her saying "Why didn't you tell me?" and him saying "I tried..." The other involves Miranda's romantic life. The movie thankfully avoids the temptation to make a certain character an outright jerk, but then falls into a pit of allowing something else to be way too convenient to avoid complexity.

Watching "The Secret: Dare to Dream," I bounced between whether to rate it a C- or a D. It's too cheesy and wedded to its questionable philosophy for anything higher, but too light to really be enraging. I eventually landed on a D because the movie just wouldn't let the pony storyline go. But then I halfway-sarcastically tried getting The Secret to work by thinking positively about a long-overdue tax refund from the IRS. Lo and behold, the next time I checked my refund status, I was told that after five months, it had finally been approved. Coincidence or not, I have to reward the movie for that. Next up, I want major theatrical releases to return full time so I can see better movies than this.

"The Secret: Dare to Dream" is available On Demand through online streaming services and likely through your local cable provider. The film is rated PG for language and an injury image. Its running time is 107 minutes.