(AccuWeather) After pummeling portions of the northern Rockies and the Plains with heavy snow, the storm system responsible for the wintry weather will begin to spread cold and snowy conditions to areas farther south that are not as accustomed to seeing flakes fly so early in the season.

Prior to the arrival of snow and ice across the southern Plains, snowflakes will fly across much of Colorado and the central Plains during the day on Sunday. In the wake of another difficult day of firefighting across northern Colorado on Saturday, heavy snow should largely help out firefighters and their ongoing efforts to extinguish the East Troublesome and Cameron Peak fires. 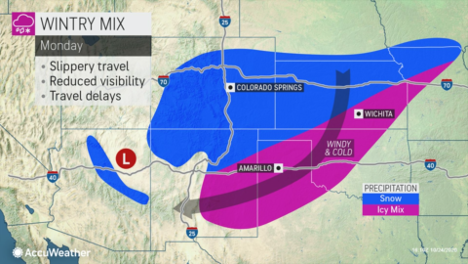 Residents in Denver will also have to deal with their fair share of cold and snowy weather Sunday as the storm barrels through the area. Mother Nature could also play an impactful role as the Kansas City Chiefs travel to the Mile High Stadium to take on the Broncos as cold, breezy and snowy conditions are expected. By the time the snow tapers off Monday morning, 6 to 10 inches of snow is expected across the Denver metropolitan area.

Wintry weather will continue to expand southward into the day on Monday, spreading down the Interstate 25 corridor into New Mexico. During the day, a wintry mixture of precipitation could even extend south of the Interstate 40 corridor in the Texas Panhandle.

Just last year, Amarillo observed their biggest ever October snowfall on record, tallying up nearly a half of a foot of snowfall, and while those snowfall totals are not expected with this storm in the city itself, portions of the northern panhandle have a shot at picking up some impressive totals.

In addition to the threat for accumulating snowfall, there will also be an icy element to the storm system across the southern Plains early this week. A significant ice storm could be in the offing for portions of the southern Plains.

As warm air near the surface of the ground clashes with the much colder air mass surging southward across the Plains, an atmospheric setup conducive for an icy mixture of precipitation is expected to develop across portions of Texas, Oklahoma, Kansas and possibly even into Missouri, as the storm system sits overhead.

The threat for a messy winterlike weather pattern will likely span a few days across this region as well. The storm system responsible for the conditions is expected to nearly stall out for a time from late Monday into the day on Wednesday, which could lead to impressive precipitation totals.

This will greatly help out the extensive drought conditions that are ongoing across the southern Plains and Southwest, although there will be a silver lining regarding the precipitation.

The snowy and icy conditions are expected to present significant travel hazards across the region, and areas that are unlucky enough to reside within the corridor of freezing rain will likely have some of the worst impacts from this storm.

As the storm system swirls over the southern Plains early to midweek, waves of moisture could tally up freezing rain amounts greater than 0.25 of an inch, which would begin to pose a threat for power outages across this zone. Typically, around a quarter inch of ice accretion or more is when a moderate to significant amount of tree limbs and power lines become susceptible to breaking from all of the added weight. Amounts near the AccuWeather Local StormMax(tm) of 0.50 of an inch of ice can cause widespread power outages and travel shutdowns. 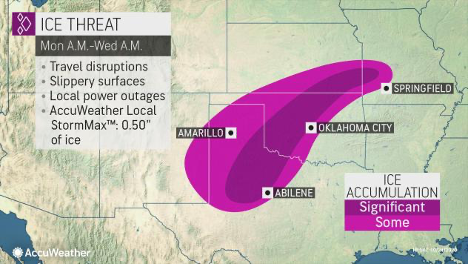 it will take nowhere near as much freezing rain to create hazards on roadways, as only trace amounts of ice can lead to hazardous driving conditions. A thin but solid glaze of ice on any road or sidewalk can make travel nearly impossible.

Farther east where temperatures won't be quite as low, the storm is also expected to tally up some hefty rainfall amounts as well. While the exact interactions are still up for debate, the storm system that will impact the southern Plains could receive an impressive injection of tropical moisture as Tropical Storm Zeta begins to track northward through the Gulf of Mexico.

Conditions across the southern Plains are expected to improve entering into the latter half of the week as the storm system should finally gain enough momentum to track out of the region. By Thursday, most locales that picked up snow, ice or a combination of the two should begin to dry out and slowly start warming up.