Records may fall as major storm continues in parts of Colorado, Wyoming and Nebraska

The same storm responsible for generally beneficial low-elevation rain and mountain snow from California to Utah and Arizona on Friday gained strength and moisture as it move through the Rockies through Saturday into Sunday.

By 8 p.m. MST on Saturday, the snow was already starting to pile up. Weston Pass, Colorado, reported nine inches of snow accumulation, while other parts of the state reported around two to six inches. By midnight MST, Denver International Airport had already recorded 7.2 inches of snow.

As the snow fell, conditions on Interstate 70 began to get "treacherous," around 7 p.m., MST. Colorado State Patrol announced a westbound closure at C-470, with all traffic being diverted east on Colorado 470. A full closure is in both directions from Silverthorne and the Denver Metro Area.

Along I-25, conditions began to worsen as well. The National Weather Service in Boulder reported that roads were getting "slushy."

AccuWeather forecasters say that Cheyenne, Wyoming, will be in the storm's bull's-eye and could potentially pick up the biggest snowstorm in the city's recorded history. Denver may not set a new snowstorm record, but the Mile High City is still expected to be buried under hefty snowfall -- and the hardest-hit areas could be left digging out from waist-deep snow with an AccuWeather Local StormMax(tm) of 60 inches predicted.

An avalanche watch was also posted for the Front Range mountains in Colorado. The wintry blast could feel all the more shocking because it is following closely behind springlike weather in some places like Denver, where temperatures averaged nearly 20 degrees above normal earlier this week. 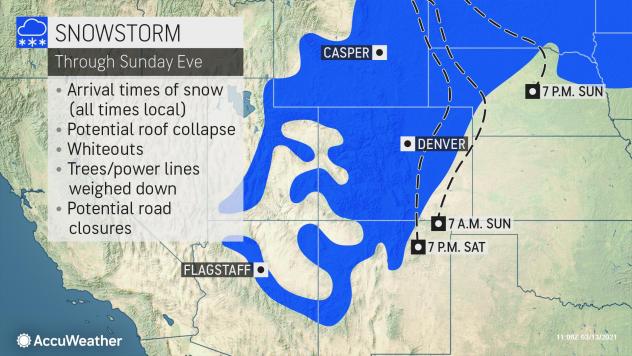 Colorado Governor Jared Polis announced on Thursday that he activated the Colorado National Guard to respond to search and rescue requests through the state's Emergency Operations Center from 12 p.m. Friday until 12 p.m. Monday.

Travel is not advised during the storm this weekend. Even if the storm falls short of official blizzard criteria, the expected rate of snow, on the order of 1-3 inches per hours, can easily overwhelm snow removal crews, strand motorists and potentially shut down airports in the region.

"I urge you to stay home if it's going to snow hard in your area, so you don't need them to rescue you," Polis said. Colorado State Patrol echoed that motorists should stay off of the roads amid what a trooper referred to as "Snowmaggedon" or "Snowpocalypse" in a video recorded and sent out on Twitter. He went on to explain, "It's much better this way," and quipped, "You know what's better than driving in the snow? Literally anything."

There is the risk that portions of Interstates 25, 70, 76 and 80 are shut down for a time this weekend. Air travelers planning on flying into or out of Denver through Sunday should be prepared to long delays and possible cancellations.

The zone from Cheyenne, Wyoming, located in southeastern parts of the state, down to Fort Collins and Boulder, located west of Denver, is facing the heaviest snowfall totals of 24 to 36 inches. Cheyenne could easily eclipse its old record for the heaviest snowstorm in history, which stands at 25.6 inches set from Nov. 19 to 21 in 1979. 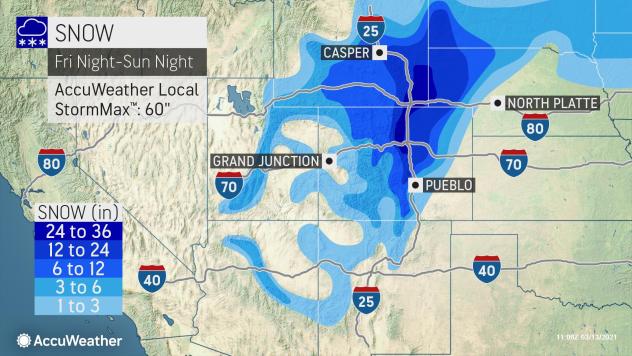 The National Weather Service office in Cheyenne, Wyoming, noted in a tweet that the snowstorm will be "VERY impactful" and "possibly historic" and later tweeted a warning on the bitter cold that will settle in by Sunday morning, which will be all the more extreme with wind factored in. It could feel like the single digits as heavy snow continues to pile up early Sunday. The NWS added, "Be sure to protect your newborn livestock!"

Denver is still in line for a massive storm, but totals will come in lower than locations farther west with a prediction of 12 to 24 inches, with 12-18 more likely than 18-24 inches at this point. That would not set the Mile High City up for a top-five snowstorm, but it could put a top-10 snowstorm in contention. Since weather records began in Denver back in 1881, nine snowstorms have unleashed more than 20 inches of snow -- and three of those major storms dropped more than 30 inches.

"We have noticed a slight northward shift with the upper-atmospheric part of the storm in the Four Corners region of Colorado, Utah, Arizona and New Mexico, and that is usually a signal that the heaviest snow may end up just north of Denver," Chief On-Air Meteorologist Bernie Rayno said.

There are other factors that may prevent a 2-foot snowfall in Denver and other parts of eastern Colorado in general. 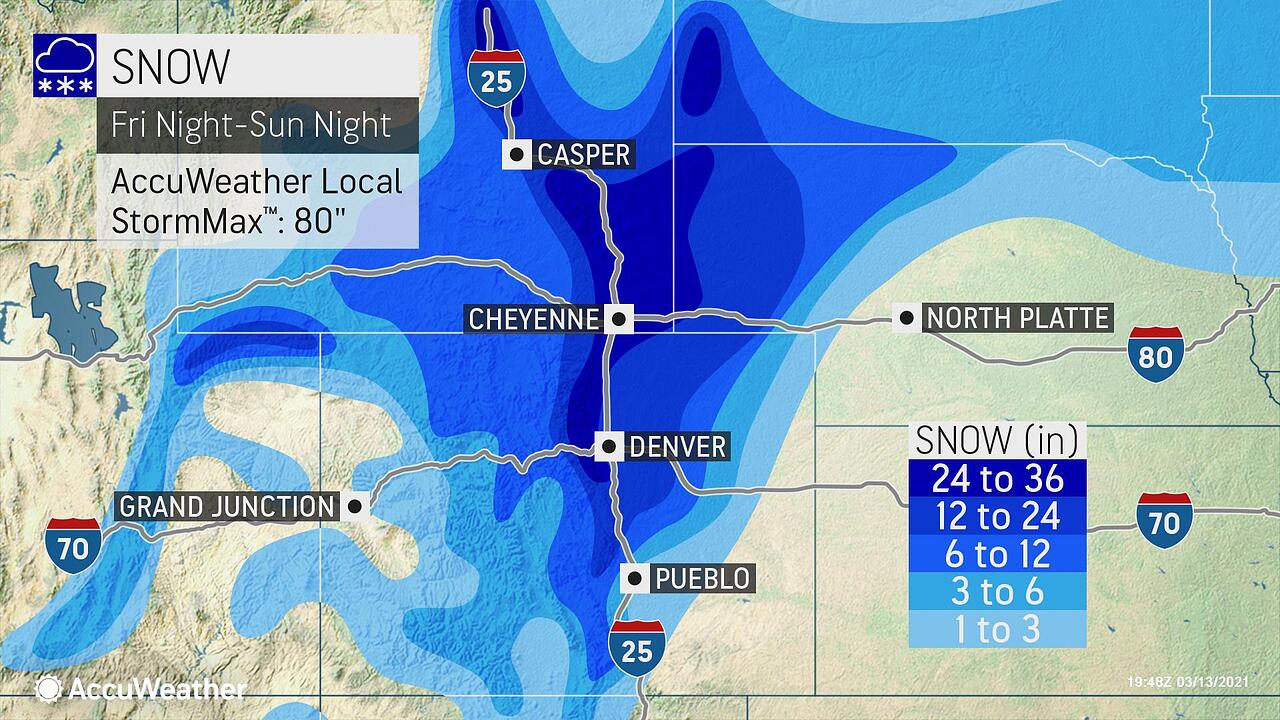 Denver is still in line for a massive storm, but totals will come in lower than locations farther west with a prediction of 12 to 24 inches, with 12-18 more likely than 18-24 inches at this point. That would not set the Mile High City up for a top-five snowstorm, but it could put a top-10 snowstorm in contention. Since weather records began in Denver back in 1881, nine snowstorms have unleashed more than 20 inches of snow -- and three of those major storms dropped more than 30 inches.

Farther north, this is projected to be a big storm for Casper, Wyoming, with 1-2 feet projected.

And as the system heads eastward across the Nebraska border, a top-five snowfall may be in the making for Scottsbluff. The fifth-biggest single snowstorm on record for the western Nebraska city was 17.8 inches on Oct. 27-29, 2009. AccuWeather is projecting from 1 to 2 feet of snow to fall there.

The zone from Cheyenne, Wyoming, located in southeastern parts of the state, down to Fort Collins and Boulder, located west of Denver, is facing the heaviest snowfall totals of 24 to 36 inches. Cheyenne could easily eclipse its old record for the heaviest snowstorm in history, which stands at 25.6 inches set from Nov. 19 to 21 in 1979. A blizzard warning is in effect for the city, along with much of southeastern Wyoming, western Nebraska and southwestern South Dakota through late Sunday night.

AccuWeather forecasters expect snow to come down at rates of 1 to 3 inches per hour at the height of the storm across southern Wyoming and northern Colorado Saturday into Sunday, with the potential to immobilize travel. Thunder and lightning could occur in the most intense snow bands. Visibility will be dangerously reduced, and portions of I-25, I-70, I-76 and I-80 could be shut down as a result.

The snow will also be heavy and wet in nature, leading to the potential for tree limbs and power lines to come crashing down under the weight of snowfall. Power outages are likely to occur. The heavy snow may not only be difficult to shovel and plow but can stress flat or shallow pitched roofs to the point of damage and failure. 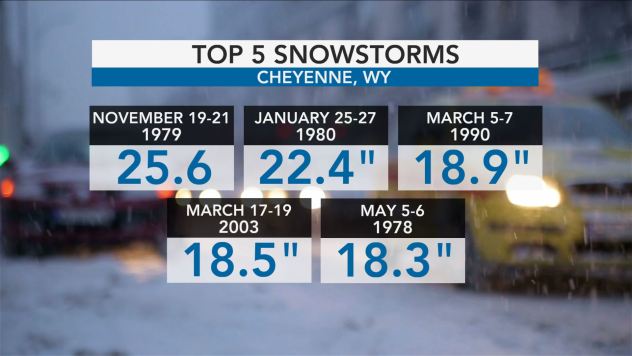 "Snowfall of this intensity will not only lead to whiteout conditions but may strand motorists on the roads and force major highways to be closed," Rayno said.

The storm is shaping up to be the biggest of the winter season for the western United States, and while it will be impactful, it could prove beneficial in one aspect: boosting snow levels in the mountains and rain in lower elevations as soil conditions range from abnormally dry to that of exceptional drought in Colorado and much of the West, according to the latest report from the United States Drought Monitor.

Blizzard conditions are possible in Wyoming and perhaps in portions of western Nebraska and southwestern South Dakota as the storm reaches peak intensity. Gusts could reach as high as 30 mph as the snowstorm first gets underway on Saturday then increase to as high as 40 mph Saturday night and up to 50 mph on Sunday. 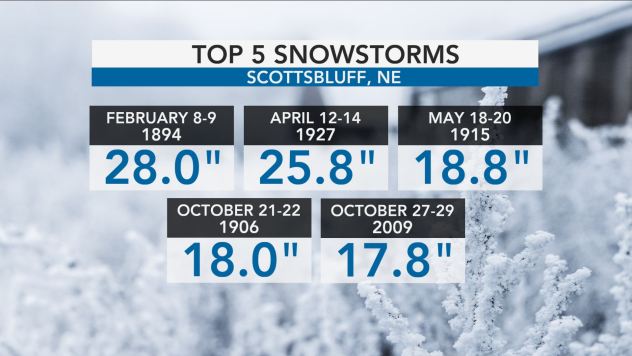 Even though winds may fall short of official blizzard criteria in much of Colorado, a mere breeze can cause some blowing snow, trees to sway under the weight of snow and trigger power outages. A blizzard is a winter storm that produces visibility under 1/4 of a mile in snow or blowing snow with sustained or gusty winds of 35 mph or greater for three consecutive hours or more.

As the storm pulls away later Sunday and Sunday night, winds from the northwest are expected to increase and may lead to more widespread blowing and drifting snow in Colorado.

Due to the risk of power outages from the storm, people should locate flashlights and batteries and make sure generators are in working order and fueled ahead of the storm. It is also a good time to review operating procedures for generators like avoiding indoor use, including in a garage or basement. 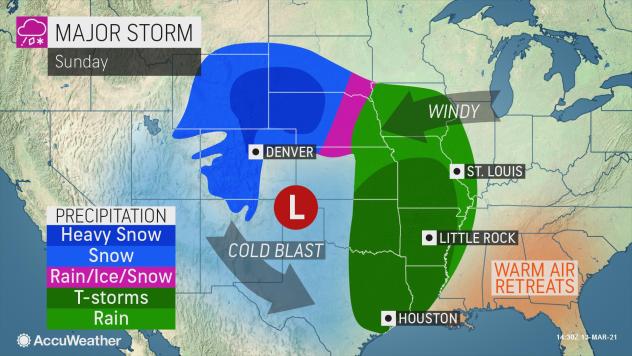 Snowfall amounts will dwindle farther to the south in eastern Colorado with Colorado Springs forecast to pick up 6-12 inches and Pueblo most likely in the 1- to 3-inch snowfall range.

Any shift in that track may cause the heaviest snow to shift farther to the south or north. As a result, people in southern Colorado and western Kansas, as well as northern Wyoming and western South Dakota, should monitor the storm's progress.

In portions of northwestern Kansas, central and northeastern Nebraska and southern South Dakota, temperatures within a few degrees of the freezing mark may allow rain or wintry mix to occur during the height of the storm. If this mixing is limited or the temperature dips slightly, then very heavy snow can fall in these locations as well.

On its warmer side farther to the south and east, the weather system is forecast to trigger severe thunderstorms across the Plains and Mississippi Valley this weekend and perhaps part of the Tennessee and Ohio valleys early next week. Snow will spread farther to the northeast over the Plains and Upper Midwest late this weekend to early next week as well and may even bring a wintry mix to parts of the Northeast states next week.

Is intermittent fasting the diet for...

Why is the FDA seeking to ban menthol...