Searching for a better cow as southwest drought persists

"Spunky," Paulin said with a smile as he surveyed his herd coming into a valley from mountain foraging. "That's one way to put it."

Originally from the Andalucia region of Spain, these Raramuri Criollo cattle are small and trim-weighing about 800 pounds each, compared to a 1,200-plus-pound Angus cattle. After being brought from Spain 500 years ago, they evolved in the mountains of Chihuahua, Mexico, where they learned to survive by searching for food in the far corners of the rough landscape. For centuries, the Tarahumara people have successfully bred Criollos with little husbandry, taking advantage of the cattle's ability to forage and thrive in arid climates to produce meat, milk, and more.

The cattle travel further and for longer periods than other breeds-even away from water-and will eat brushy shrubs when grasses run low due to drought. These unique grazing habits support native vegetation and reduce fire fuels at a time when California and the U.S. Southwest are facing a megadrought that could last another eight years. California is the driest it has been in 1,200 years, and this year wildfires have already burned more than 53,000 acres in the state.

Some Western ranchers are responding to the crisis, reducing wildfire risk, and conserving water by restoring native grass ecosystems and reducing overgrazing to avoid thinning herds.

Paulin has spent the last 10 years trying to improve the ecological footprint of the 4,500-acre Corte Madera Ranch by reducing biodiversity loss and ground compaction, which makes it difficult to retain water, without downsizing the ranch and jeopardizing his profitability. The profit margin from raising cattle is tight, so ranchers often trim costs by culling their herds during drought.

Since 2005, researchers from the U.S. Department of Agriculture and New Mexico State University (NMSU) have studied the Raramuri Criollo's potential to produce more sustainably in the drought-prone Southwestern states. In 2015, Corte Madera Ranch became one of five ranches across the U.S. participating in the Sustainable Southwest Beef Coordinated Agricultural Project-adding Criollo heifers and a bull into its Angus herd. 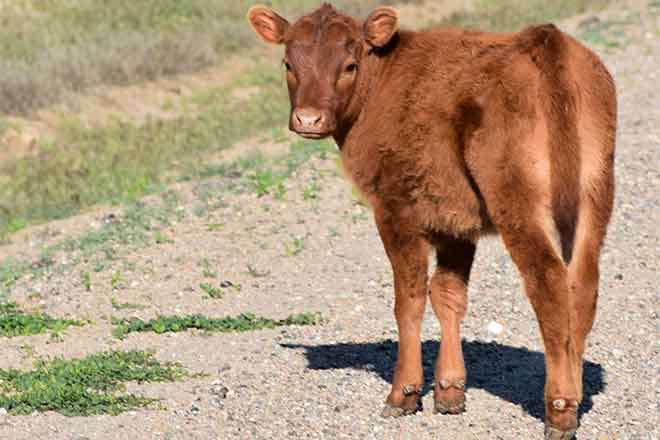 The federally funded study compares the economic and environmental impacts of Angus-Hereford and Raramuri Criollo cattle in arid places. So far, researchers found that the Criollo are better suited to shrubby landscapes and have a lower footprint than Angus and other commercial cattle. At the Corte Madera Ranch last year, the drought forced its owners to reassess operations.

"Between all the Angus we had and the Criollos, there was just a little too much, and we were getting some overgrazing that we didn't like," Paulin said, who decided to sell the last remaining Angus. "We have nothing but Criollo mother cows now," he said.

With their Loki-style horns, the Raramuri Criollo are cousins to the Texas Longhorn, which grew larger as they evolved alongside commercial English Angus production.

It is believed that the Raramuri Criollo were on the "first shipment of domestic livestock destined to inhabit the New World"-somewhere in the West Indies-during Christopher Columbus' second voyage between 1493 and 1496. The cattle underwent a "semi-natural selection" over the course of nearly four centuries, according to NMSU scientists, as red meat consumption in the U.S. favored larger, faster-growing English breeds.

With little demand for Spanish cattle, the Criollo largely remained isolated in Mexico's Copper Canyon for centuries. They were forced to adapt into nimble-footed foragers with a willingness to venture away from water sources-the ideal characteristic for a desert rancher.

Raramuri Criollo "had to fend for themselves, and so they became resilient," Paulin said.

On a June day, cooled by the fire-exacerbating Santa Ana winds, Paulin and Walker looked out to the site of a prescribed burn carried out by Cal Fire on Valentine's Day, part of an ongoing effort to reduce wildfire risk in the high desert of Southern California. It's hard to decipher between the treated and untreated acres-the fire-treated land is lush with growth-but after a second look, the vegetated area appears almost swept clean, even months after the burn.

"That's less of the ladder fuels to lead into the tree so the tree catches fire," Paulin said, referring to shrubs, low-lying tree branches, and other fuels that can spread fire burning to taller vegetation.

Once given some time to regenerate, Corte Madera's Criollo cattle will scour the Cal Fire-managed areas for new sprouts and rid the ranch of fire-fueling shrubs such as Mountain Mahogany. These fire management plans help landowners lower the likelihood of wildfires getting out of control. Fires that burn at very high temperatures for too long can sterilize soil and inhibit new grass and tree regrowth.

While English cattle tend to graze in a compact area in one pasture, the Criollo hunt for food across greater distances, which is less detrimental to the land. Improper grazing management alters fire patterns and the land's ability to regenerate naturally, according to NMSU researchers, but adopting new practices can help limit flammable brush and encourage deep-rooted native plant growth.

"Conventional grazing can be more devastating to the land than fire, because fire comes through and doesn't stay," explained Ann Adams, the education director for Holistic Management International, a global farm management agency. "[Fire] doesn't keep hammering the same grass over and over again the way that a stocked animal will."

Paulin has noticed that, unlike the commercial breeds, Criollo seek out patches of new grasses after pastures have been burned, but will not eat down to the soil. This grazing style helps keep fire fuels low as the cows replenish the land with manure.

"If [the land's] got that fuel load down and there's fresh grass growing, that can actually suppress the fire that comes in to the land," Adams said. "It's not just that the animal turns the carbon of the plant into fertilizer through its dung and urine . . . As it prunes, that is also bringing nutrients to the roots through the liquid carbon pathway."

Working in part with the scientists in New Mexico, Paulin found that the Raramuri Criollo's grazing helps reduce fire fuels without decimating native vegetation. In fact, he told Civil Eats he's begun to see native grasses that haven't flourished in a long time.

"Native grasses, when they're gone, it's really tough to bring them back," Paulin said. "We're starting to get places where needle grasses and deer grasses are growing back, where before we had two little patches of them."

Criollo are considered sports breeds, typically sold for rodeo events and not off to market.

Paulin and Walker still crossbreed Criollo with Angus bulls so that Corte Madera Ranch can sell it on the meat market as a beef animal-rather than as a recreational animal. NMSU found that quality cuts of Raramuri Criollo meat are comparable to the English breeds. Paulin noted that the leaner Criollo meat has more nutrients than Angus and is a match in taste.

A big obstacle to greater availability of Criollo meat in the market is that the few existing meat processing plants in the U.S. aren't suited for the small-framed animal-at least not yet, Walker explained. Some individuals privately slaughter and market Criollo cattle on their own.

"There are basically four main meatpackers in the United States," Walker said. "It's not that somebody couldn't make money, it just wouldn't be the same way as traditional meat right now, because [Criollos] aren't accepted in [these] facilities."

Although Corte Madera Ranch keeps its Angus bulls to attract better prices in the conventional market, NMSU purchases most of the cattle for its research pool, and the ranch auctions off any cattle not sold on the market.

Another perk of raising Criollo cattle is that their self-sufficient grazing makes them more cost-effective than English breeds. The Corte Madera Ranch has saved between $4,000 and $10,000 annually on supplemental feed and mineral bin costs.

"We only feed them when it snows," Walker said, "basically to keep them on the ranch."

The Corte Madera Ranch supplies its cattle with simple salt licks roughly the size of a cinder block to provide essential minerals.

"We've come to a point where it looks like we can maintain the herd through a drought without devastating the land, and the reason for that is because the Criollos will go so many places [to graze]," Paulin explained.

Diversifying from Angus, which comprises 90 percent of the beef market, is risky for ranchers trying to keep costs down and steady the flow of cows to the market. During dry years, California cattlemen must weigh the value of their herd with the bottom line and hope for a wetter season the following year to feed their land and cows.

While the Criollo cattle may not be the solution for all rangelands, they may relieve some pressure for those in the arid environments of the American Southwest. And the managers at Corte Madera Ranch say they are seeing better profit margins than before their Criollo integration.

"We're able to keep a third more mother cows on our land, because of the way the Criollo use our land," Walker said.

At the same time, the land is improving, rather than deteriorating, Paulin added. "That's the key."