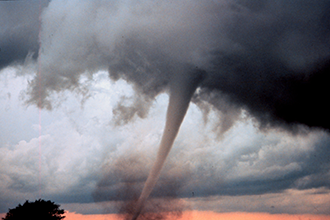 The threat of tornadoes in Colorado increases rapidly in May and continues through August. Ninety percent of Colorado tornadoes occur during this four-month period, but tornadoes have been reported as early as February and as late as October. At least two tornadoes were spotted in Kiowa County in mid-April this year.

Tornadoes have been reported in just about all areas of the state, but historically 95 percent of Colorado tornadoes occur along and east of Interstate 25 where heat and moisture in the lower atmosphere are often more abundant. Tornadoes can occur at every hour of the day, but most occur between 1:00 p.m. and 8:00 p.m.

Across the country, about 90 percent of tornadoes are considered weak with winds less than 110 mph. Winds of this magnitude will damage a wood frame construction home but may completely destroy a mobile home or outbuilding. They typically have a life span less than 10 minutes and result in less than 5 percent of tornado fatalities.

An easy phrase to remember for tornado safety is to Get In, Get Down, and Cover Up. Get inside a sturdy building, get down to the lowest floor or most interior room in that building and cover your head.

The best option for tornado safety is to be inside a well-built structure within a basement, safe room or underground storm shelter. If none of these options are available, move to a hallway or a small interior room on the lowest floor such as a closet or bathroom. Cover yourself with blankets or get under a sturdy piece of furniture because the greatest risk of injury from tornadoes is from flying debris.

Abandon modular homes and mobile homes as they offer little protection from tornadoes. If a tornado approaches, leave these locations and seek safety in a nearby building or storm shelter.

If you are driving in open country and see a tornado, simply drive away from the tornado path if time permits. Do not take shelter beneath a highway overpass. If you are in an automobile and a tornado is fast approaching with little time for action, either pull over and remain buckled in your vehicle while crouching down, or abandon your vehicle and lie in a ditch or culvert away from your vehicle and protect your head.

If you are caught outside and cannot find a safe shelter, crawl into a culvert or lie down in a narrow ditch and cover your head. But remember that these are poor, last-minute options because the worst place to be when a tornado threatens is outside in the midst of flying debris.

You can get the latest weather forecasts and severe weather watches and warnings from a local NOAA All-Hazards Weather Radio station and on the Internet at weather.gov.