"Children, let us love not in word or speech but in deed and truth." I John 3:1

"Hidden Hurts" is a term I heard last week which reminds me that we never really know the hidden hurts that may be affecting a person's behavior.

The highlight of the "Chamber After Hours" July 9 was the announcement of the Citizen and the Volunteers of the Year. Fair Board President Bart Michael, Vice President, Scotty Englehardt, Tearle Lessenden, and Areta Blooding-Laird accepted the Volunteer of the Year-2017 Plaque and each spoke about some of the work and committee plans for the 2018 six-day fair. Michael and Lessenden expressed gratitude for all the other volunteers of the county who work with them to make the fair happen. The other Fair Board members are Secretary, Mike Johnson, Treasurer, Barbara Scranton, Bobby Sinka, A. J. McCracken, and A. J. Bolin. 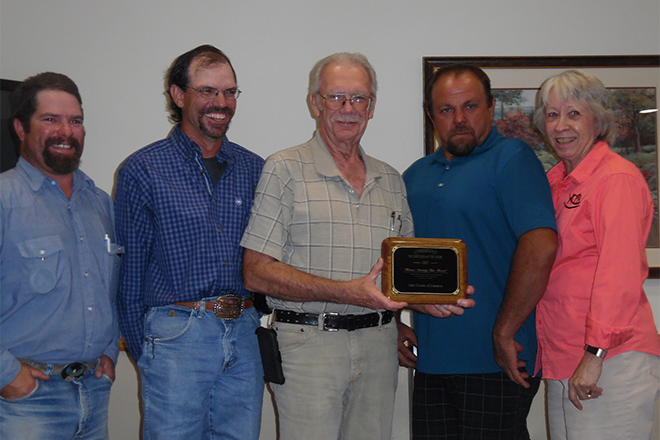 Chamber President Dennis Pearson read the nomination for Jan Richards to be awarded the "Citizen of the Year" plaque for her community work since she came to Eads in 1971. In the beginning she had a plumbing business and then was the Elementary School secretary before she served as the Town of Eads Assistant Clerk. Ten years ago, she took over the helm as Director of the Kiowa County Economic Development Foundation (KCEDF). Since then she, with the support of the KCEDF Board, has brought about numerous good changes and improvements for benefit our county. She has been a "friend" of the Sand Creek Massacre National Park north of Chivington. In this role she arranges meetings, schedules, and other details for the visiting Native Americans and government officials. She is the marketer and promoter of the Kiowa Estates, and is coordinating the construction of six apartments west of Jackson's historic barn. The planning and arrangements following government guidelines for the child care center for next year and other community events such as Kid Fishing Days, Christmas money drawings, and being the first contact person with businesses such as the oil industry, wind farms, new companies like Loves coming to Eads are other ways she helps our county. She has initiated bringing huge numbers of people to Eads such as for the three day Pedal the Plains bicyclists, and the 2017 Aeronautical Big Dream for hundreds of students and adults from surrounding schools as well as for the beautification of Eads buildings before the opening of the Sand Creek National Park festivities. The guests enjoyed fix-your-own-flour tortillas with a variety of toppings and elegant pies and desserts prepared by Chef Christina Wolf and assistant Molly Kelley set on patriotic table settings. Thanks to the Chamber who paid for the meal. PPAL Director Pam (Brown) Weirich welcomed the audience and invited them to walk around their lovely new memorial floral garden and gazebo. She also explained that the November ballot issue needs a "yes" vote and it does not raise taxes. 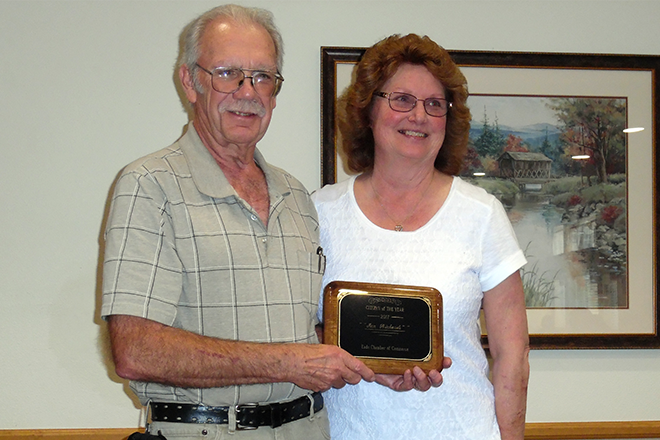 Jan Richard (right) receives the 2017 Citizen of the Year award from Dennis Pearson, representing the Eads Chamber of Commerce.

Some of us listened to the Crow Luther Board in action as they firmed up plans for the free Maine Street Bash for Saturday, July 28. This street festival begins at 10:00 a.m. for people to wander around the tents and booths on Maine Street while listening to music and bands. There will be a food court, bake sale, house goods yard sale, clothing boutiques, entertaining games for children, teens, and adults. There will be a beer garden as well as a corn hole game and a horse shoe tournament. The live music begins at 3:00 p.m. with Jamie Crocket and Friends Band, at 6:00 to 8:00 p.m.- Rhett Uhland Band, and after 8:30 pm with the Union Grey Band from Denver. Look for fireworks after dark.

Bob and Renee Woods celebrated their 64th wedding anniversary in Rawlins, Wyoming, where they were with all of their families to celebrate the wedding of their grandson, Tyrel Smith. He and his wife, Ashley, who is a nurse, are moving to Idaho where he will be teaching in a large high school. Tyrell is the grandson of Sherry (Woods) and Jim Lyon of Wamsutter, Wyoming. 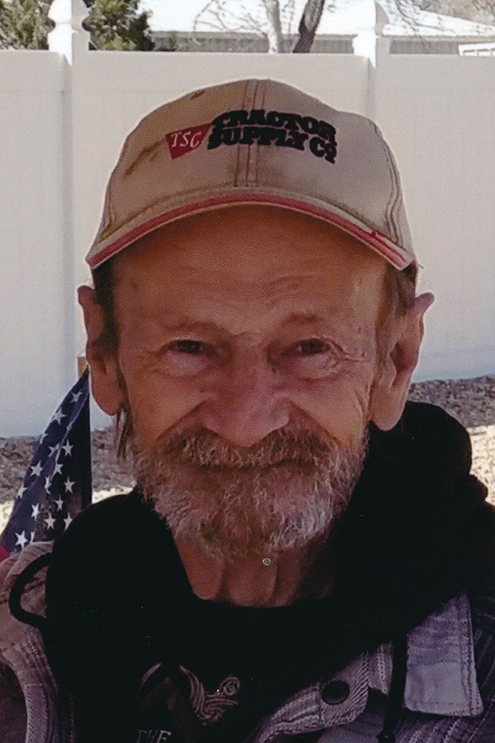 Two Kit Carson people passed away this month. Our sympathy is extended to the families of Royce Carter and former Eads resident, Chuck Emmett.

Horsewomen, Dawn Back, local Physician's Assistant, and FFA advisor Lindsay Todd joined forces and have planned exciting horse competitions and educational opportunities for people of all ages. The first event was a Gymkhana here in Eads June 8.

There have been a number of Flights for Life from Eads where the Weisbrod staff and county EMT crew meet the helicopter on the landing pad west of the Prairie Pines. Many lives have been saved by this medical service.

A week ago, after attending the Lutheran Church in Kit Carson and a LWML ladies meeting, I returned home for a quick lunch and decided to go to church in Haswell to hear Pastor Spenser Black. He is such a good preacher, even after preaching at 9:00 a.m. in Cheyenne Wells and in Eads at 11:00 a.m. and then at 5:00 p.m. in Haswell. On the third Sunday, he gives a message at the Weisbrod Extended Care Unit at 2:00 p.m.

The Trinity Church and friends of Ken Bergman of Kit Carson whose home burned to the ground are having fundraisers the next few months to help Ken. I always remember how tragic it was for Margaret Brown when her home burned down south of Chivington. Such loss is real grief for a person and a family.