"Now these three remain, faith, hope, and love. But the greatest of these is love." I Corinthians 13:13

During the Kiowa County Fair, I saw and felt so much faith and hope expressed but above all, I saw and felt so much love shown in hugs, waves, and sincere words of greetings. People really do love going to the early morning breakfasts where people are in the grassy space north of the bank. Breakfast chairman, Brandon Hoffman, with many local volunteers, cooked and served a great breakfast. Three of the five Lujan brothers, Ron from Idaho, Kelly from New Mexico, and Carl from Oklahoma, returned to help serve. Kelly also brought his mother, Rose, from Albuquerque too. It was good to hear the singing and playing by Phil Pollreis also.

When Roberta (Mays) Hines of Canon City stepped into the Exhibit Hall, she caught her breath and said, "How pretty it is in here!" It was indeed attractive with lovely art pieces, photographs, hanging quilts, afghans, garments, and lovely floral and garden displays on display. Tuesday, Superintendents Areta Laird, Joyce Berry, Alice Glover, Gloria Peck, Sharon Scott, and Debbie Gooden spent most of the day cleaning the hall for exhibits after the county crew brought in the furniture. Meanwhile, the Junior Livestock Committee worked in the pavilion with the 4-H members and the FFA members to show their animals. For years, Timy Trosper, Chairman, Rod Cole, Eric Ellenberger, Trent Jones, Junior McDowell, Mark Nelson, and Michelle Nelson have overseen the shows and the livestock sale.

The rodeo royalty, Morgyn Johnson, Kiya Leonard, and Braya Ferris, were busy carrying out the duties in the show barns and the arena.

Administrative Assistant Karen Jones was busier than ever without a county extension agent, but Teresa Witte sat in the office for hours also typing and working with people. These women spent numerous hours and nights compiling, typing, and organizing to make the fair days and exhibits fine and special! Also "happy birthday," Karen.

Commissioners Cindy McLoud, Donald Oswald, and Dick Scott were around the fair to help, and to mingle with the fair goers. We really put Don to work with his height, hanging quilts and art work in the exhibit hall.

Shar (Ronnie) Weiser of Grand Junction represented the Quilts of Valor Foundation, who made beautiful red, white, and blue quilts that were presented to nominees Bill Woelk and Jerry Ritchie, both Marines. Then Wally Mosher made a presentation of wooden crosses he had made and gave them specially designed caps. There was a standing room only crowd in the Cobblestone Inn. Tasty meat, cheese, and fruit trays were complimented by exquisitely decorated cakes by Mary Eikner's daughter, Katie Bost. Karen Eikner Tshimbalanga brought the marble cakes with the Marine logo imprinted on edible rice paper to the reception. The presentation and reception were overflowing with warmness and tears. Five of Jerry's siblings plus spouses were there, in addition to his son, who flew in from Cincinnati, Ohio. Jeff and Char Woelk were at the Friday gathering, as well as many Shalberg relatives, appreciative friends, and students. While at the party, some of the student friends and well-wishers I saw (using maiden names) were five Durrett sisters, Donna Rose, Betty, Jean, Carol, and Barbara, Joyce Barber; Kas Fischer; Jerry's sisters, Arnitha, Bonita, and Sandi Ritchie and brothers, Richard and Duane; Whit and Mary Eikner; Cardon and Joyce Berry; Wally and Phyllis Mosher; Jeff and GeorgeAnn Woelk; Char Woelk; Bob and Pat Crabtree; Dr. Richard Moore; Leon Tank; Diane Scroggins; Scroggins; and Jim Garner - who recently returned from Berlin, Germany - and I am sure many more I couldn't see. Jim had been in Germany for a reunion with his Army unit.

Friday night, the parking lots and streets were completely filled with vehicles for the Granada-Eads sports games, so I drove out to the fair grounds and saw even more vehicles at the rodeo arena for the "mini broncs and mini bulls" competition. Tim Hogan, Mark Hogan, and Jeremy McNeeley were warming up their band for the foot stomping dance in the historic American Legion Hall, and a mother and children were tending animals in the pavilion. 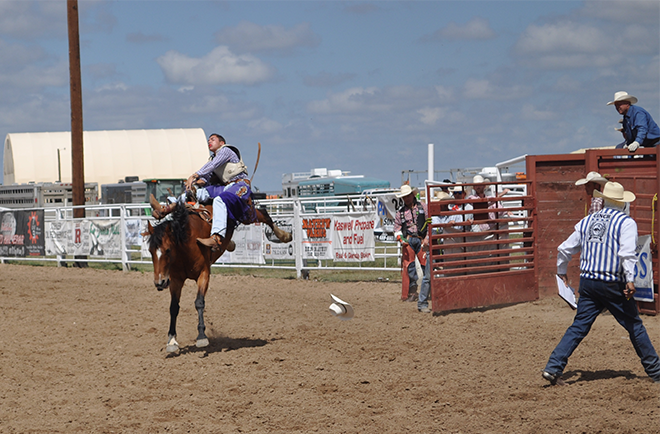 Rev. Don and Madonna (Fox) Jones were happy that their daughter, Linda, accompanied them from Bloomington, Illinois, to Eads. Lane and Debbie Gooden and their families were happy, too, since Mrs. Lillie Fox was their children's "adopted" grandmother.

Pat (Benner) Roper brought a yellow friendship quilt of Chivington folk, made of about 74 blocks, with names of people there in the 1930's to 50's. A lady gave it to her for our museum. Pat is the Chairman of the Museum Board. People really did enjoy the documentation, and listed names such as Sinka, Abrams, McCracken, White, Peck, and Rehm.

The parade was terrific, as well as the exhibits, rodeos, kids carnival games and entertainment. There was a beer garden, and the food vendors had excellent foods during beautiful sunny weather. 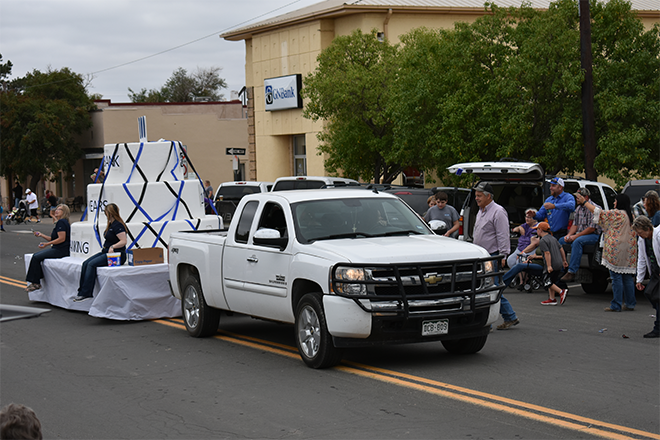 Larry Michael and his daughter, Jodi Stolzenberger, flew to Virginia to attend the funeral of his sister, Shirley Britt.

Our sympathy is extended to Darrin Epper and his family since his mother, Mary Holcomb, passed last week.

Ronald and Shirley White were chosen the "Good Scouts" and were Kit Carson parade marshalls. The Town of Kit Carson had an engraved plaque embedded in a large wooden statue of a buffalo with eagle wings wrapped around it to honor Chuck Emmert, who worked 20 years as Town of Kit Carson maintenance manager. This chain-saw art piece was created by Treeslayer, Len Robinson.