Northeastern counties received isolated but beneficial moisture and experienced cooler temperatures. Some fieldwork was delayed due to prior received moisture, but spring planting continued where conditions allowed. Lack of heat units was a concern for growth of seeded corn. Planting of non-irrigated corn was noted as slow.

A few east central counties received isolated moisture but the rest remained dry. High winds were observed. A report in Kiowa county noted that dry weather and high winds further hurt the winter wheat crop, including acreage thus far that had been better off.

In the San Luis Valley, potato planting advanced very quickly and planting of barley was nearly complete. A report noted that prior freezing temperatures hurt the barley in areas and some acreage was being replanted. No moisture was received last week and drought conditions worsened, but overall the weather was ideal for most irrigated crop growth. The alfalfa crop was noted as a couple weeks behind.

According to the latest U.S. Drought Monitor report, some southern counties were experiencing extreme drought (D3), a decline of one category from the prior week. 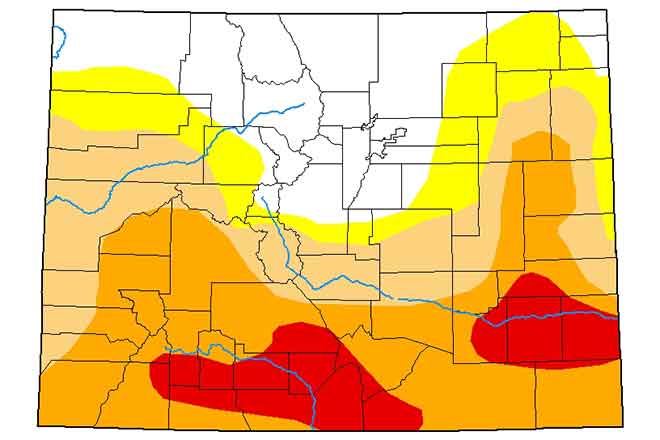 As of May 11, 2020, snowpack in Colorado was 69 percent measured as percent of median snowfall. The Southwest and San Luis Valley were 39 percent and 27 percent, respectively.