Blizzard, icy conditions may close out the year in the central US

AccuWeather Global Weather Center - The end of the year is quickly approaching, but Mother Nature is set to bring one more winter storm to the center of the country. A significant amount of ice and the potential for blizzard conditions can lead to dangerous travel before the door closes on 2020.

The first "real storm" of the season has begun to track through southern portions of the western U.S. to start the final week of 2020 and has already delivered the biggest single-storm rainfall in many areas since last spring and late-winter to parts of Southern California.

After bringing a fresh accumulation of snow to the Rocky Mountains through Monday night, the storm will move out over the Plains. It is here the storm is expected to strengthen and spread precipitation across the center of the country on Tuesday and Tuesday night. 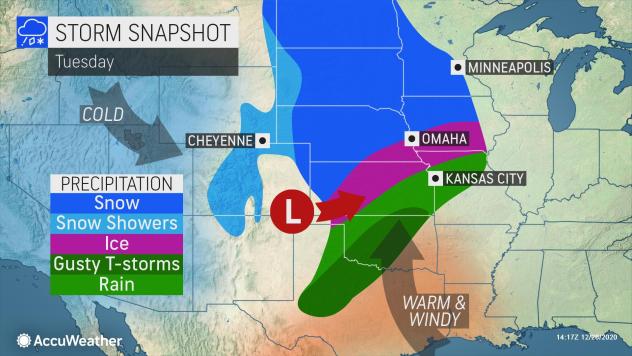 As the storm strengthens, it will draw in moisture and more mild air from the Gulf of Mexico, which will fuel areas of heavier precipitation into the middle of the week.

In the south, any downpours can lead to flash flooding, mainly in low-lying and poor drainage areas, including around Kansas City, Oklahoma City and Dallas. In addition, some of the thunderstorms across the South Central states are likely to be heavy and gusty and eventually may produce severe weather as the week progresses. 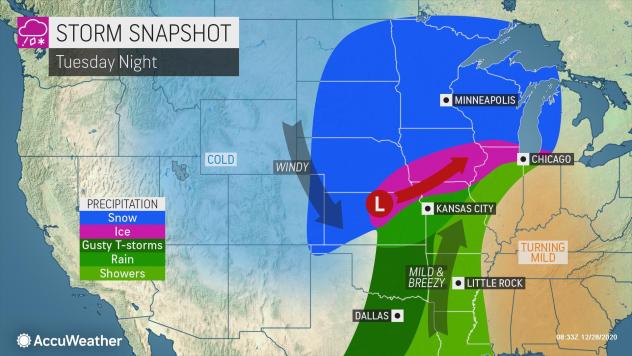 As this mild air pushes north, it will run into much-colder air that has settled over the central and northern Plains, which will cause precipitation to transition into an icy mix.

Cities that may fall in this icy zone include Omaha, Nebraska, Des Moines, Iowa and even Madison, Wisconsin. Any untreated surfaces in this area can become slippery throughout the day.

Ice that accrues over 0.25 of an inch, is most likely to occur across southeast Nebraska, northeast Kansas, northern Missouri and southern Iowa. This ice can weigh down tree branches and power lines, which can lead to localized power outages.