EarthTalk – Where do the Democratic presidential contenders stand on climate change?

Dear EarthTalk: Do all the Democratic contenders for President in 2020 agree on the need to battle climate change? Which ones have demonstrated the most leadership on environmental issues?

A recent New York Times survey of the field found that each candidate favors bringing back Obama-era regulations designed to curb power plant and automotive emissions and curtail coal leasing on federal lands. Likewise, all 18 say the U.S. should recommit to the Paris climate agreement despite Trump's efforts to pull out. But less than half (Castro, Gabbard, Gillibrand, Hickenlooper, Inslee, O'Rourke, Sanders, Warren and Williamson) are for even stronger new regulations to push us further faster on transitioning to a green economy. 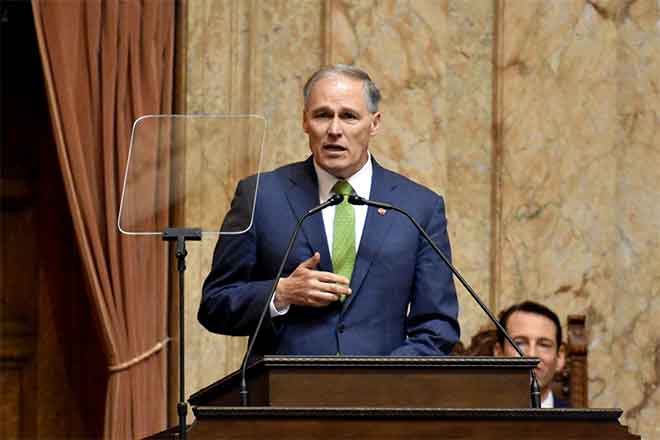 Washington State's governor Jay Inslee, one of the first Democrats to declare his candidacy for the White House in 2020, aims to make climate change a central issue in the 2020 election. Credit: Office of the Governor, Washington, FlickrCC

Meanwhile, the non-profit 350 Action recently published the results of its 2020 Climate Test, a scorecard rating each candidate's climate cred based on whether they support the Green New Deal or similar legislation, have taken actions to keep fossil fuels in the ground, and have pledged to refuse campaign financing from petrochemical interests. Gillibrand, Inslee, Sanders, Swalwell, Warren and Williamson scored 3/3 on the test, while Booker, Buttigieg, Gabbard and Yang each scored 2/3. (Delaney and Hickenlooper failed all three tests, despite acknowledging that climate change is a serious issue.)

Perhaps the candidate with the most climate skin in the game is Washington governor Jay Inslee, who has declared solving the climate crisis the primary focus of his White House bid. His 2007 book Apollo's Fire: Igniting America's Clean Energy Economy laid out a plan for solving the climate crisis via a rapid transition to renewable energy sources with massive investments in clean energy jobs that would benefit Americans from all walks of life--much like the Green New Deal proposal released earlier this year by New York Congresswoman Alexandria Ocasio-Cortez. Harris, Booker, Gillibrand, Sanders and Warren each served as co-sponsors for the Green New Deal's introduction in the Senate.

Warren, a longtime sympathizer with environmental causes, recently released her plan to boost renewable energy production and protect public lands if she becomes president. The crux of her proposal calls for banning the extraction of fossil fuels on public lands (and off-shore in domestic waters) and replacing it with renewable energy production so as to meet 10 percent of the nation's overall electricity supply.

If any of the Democrats can take control of the White House in 2020, environmental advocates will no doubt breathe a sigh of relief.