Even after he retired from Colorado Parks and Wildlife in 2010, Merson kept up the watch, returning each summer to Lake Pueblo State Park to work as a seasonal boat ranger. 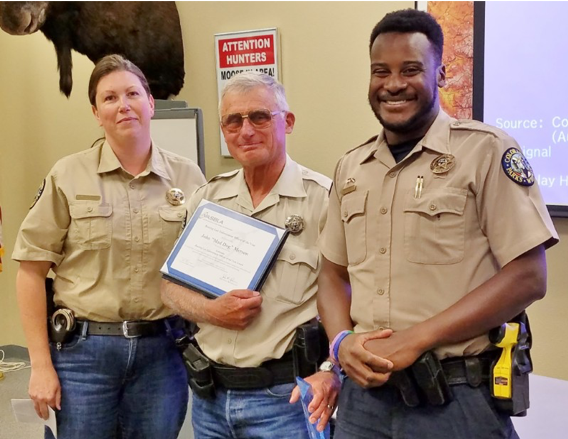 His dedication and commitment to educating boaters, enforcing water safety laws and rescuing people in need were all cited when CPW recently honored Merson as the Boating Law Enforcement Officer of the Year for 2017.

"He has created a culture of safety at Lake Pueblo as he actively strives to ensure safety of all the visitors on the lake," Stadterman wrote in his nomination. "There is not a single person in the South Shore Marina who does not recognize Mad Dog.

"It is not uncommon to go to the marina and see John interacting with young children, teaching them about the importance of wearing a life jacket. He has inspired and educated multiple generations of boaters to not only have fun, but to also be safe."

"John has made outstanding contributions to boating safety in Colorado," Brown said, noting his service both at Lake Pueblo and at John Martin Reservoir State Park.

Park Manager Monique Mullis also praised Merson for being an inspiration to staff and ranger trainees.

"John has contributed so much to Lake Pueblo, Colorado Parks and Wildlife and the boating public we serve," Mullis said. "I'm thrilled the agency agreed and is honoring him with this award."