The soulless white mask of Michael Myers might be the scariest thing I've ever seen in my life. It was in 1997 that I read an article on slasher movies accompanied by a picture of Myers holding a huge knife. This happened to be right before I spent a week at my grandparents' eerily quiet farmhouse, and I spent four sleepless nights expecting The Shape to show up at any moment. It was only later that I came to respect John Carpenter and his 1978 horror classic "Halloween" for managing to scare me so effectively. Of course, Carpenter's original was followed by several less-terrifying sequels and the forgettable Rob Zombie reboot, so Michael and his mask have since lost their edge, but my hope was that resurrecting Myers for a new "Halloween" film in 2018 would make me scared all over again. For better or worse, I am now less scared of Michael Myers than ever. 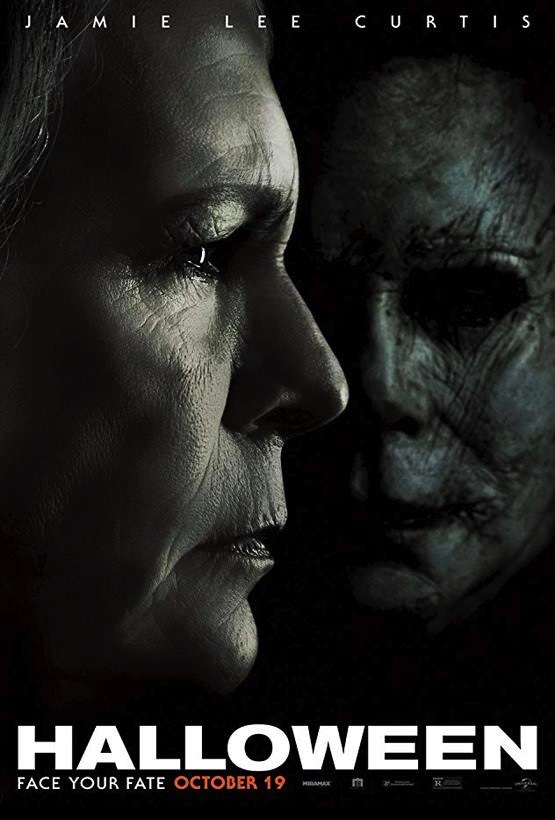 The new film is a follow-up to the first "Halloween", but erases all franchise lore that came after, including the twist of protagonist Laurie Strode (Jamie Lee Curtis) turning out to be Michael's sister. She was just some teenager who survived Michael's killing spree and was subsequently traumatized. Laurie's life has completely fallen apart since that fateful night, as she's lost two husbands, custody of her daughter (played here as an adult by Judy Greer), and her mind in general. Michael, for his part, has been locked away in an asylum where was studied at first by the iconic Dr. Loomis, and now by the oddly-obsessed Dr. Sartain (Haluk Bilginer).

A pair of journalists (Jefferson Hall and Rhian Rees) visit Michael right before he's scheduled to be transferred to a new facility and basically taunt him with his old mask. Michael breaks free during the transfer (shocking, I know) and sets out on another killing spree, though he has to get his mask back first... He eventually makes his way back to his hometown of Haddonfield, IL, where he picks off some lonely homeowners, incompetent police officers, and his personal favorite, hedonistic teens. He eventually comes to target Allyson (Andi Matichak), Laurie's granddaughter. This gives Laurie all the more reason to lure Michael to her home in the woods, where the two can have a final showdown to attain closure after 40 years.

The film is at its best when it plays as a comedy. It has fun referencing the original film and there are some laughs from minor characters who make stupid horror movie mistakes. There's also an extended bit from Allyson's babysitter friend (Virginia Gardner) and her young charge (Jibrail Nantambu). I can see where some viewers could be annoyed that the film just lets these two seemingly riff for several minutes, but it's a really funny riff that justifies its existence.

Of course the bulk of the film is straight horror, and I'm sorry to say that it doesn't pull it off too well. Michael is completely expected every time he shows up, and his victims are rarely likeable enough to curry interest in their survival. Even the mask is less scary this time around, its disturbing pure whiteness replaced with a sort of flawed silver. The climax in Laurie's house is especially frustrating because it has been established that Laurie has been preparing for this moment for 40 years and you'd think she'd have a more polished defense in store for the stalker. One tactic is a particularly underwhelming slow burn, you can email me at rrg251@nyu.eduif you want to know what realistic alternative I would have used instead. Although I enjoyed some early parts of the new "Halloween", I can't bring myself to recommend the film because in the end, it just isn't that scary.

"Halloween" is rated R for horror violence and bloody images, language, brief drug use and nudity. Its running time is 105 minutes.