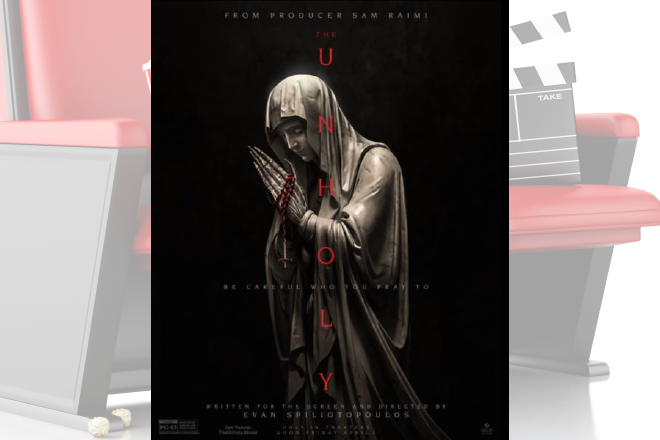 Some time back I wrote about how Oscar season got pushed back a few months, which was why we were getting movies like "Nomadland" and "Judas and the Black Messiah" in February. Now with "The Unholy," it's like January has come to April. January is typically the time of year when studios like to dump their lousy horror movies that couldn't compete on Halloween. The film actually opened last Friday, Good Friday, no doubt intentionally so the marketing team could blasphemously brag that it was opening "on the holiest day of the year." The idea was to cause controversy, but nobody cared about this movie enough to fight over it one way or the other. If anything the campaign backfired, because made it seem like the film was outdated by the time I saw it the very next day, and of course it's a really lame duck now. But nothing wanted to open this weekend in the shadow of "Godzilla vs. Kong," so I have to settle for reviewing last weekend's #2 movie that has already fallen to #3.

Jeffrey Dean Morgan stars as Gerry Fenn, a disgraced reporter looking for a comeback. A story about cattle mutilation in rural Massachusetts proves fruitless, but he thinks he can salvage his career with a story about a bogus miracle involving a creepy tree and a creepier doll. He stays in town long enough to get in a car accident and witness an "actual miracle," where deaf teenager Alice (Cricket Brown) is suddenly able to hear, speak and even sing. She becomes a faith healer, helping a deaf child walk for the first time and curing her priest uncle (William Sadler) of his emphysema.

People flock to Alice, especially when she interacts with the tree - her line of communication with "Mary," presumably the Virgin. And because Gerry was there at the beginning of her interactions, Alice grants him exclusive interview privileges. Sure, he has to contend with an annoying local bishop (Cary Elwes - his accent unmistakably locked on "Boston gangster") and a Vatican-sanctioned miracle-disprover (Diogo Morgado), but for once he believes in the subject of his story. Or at least, he's sure of the miraculous things he's seen. The circumstances may not be as pure as the Virgin Mary suddenly bestowing blessings on this small town.

Eh, it's no secret that this is a horror movie, so why play coy? There's a malevolent creature at work named Mary, whose scheme is to get people to pledge their souls to what they think is the Virgin Mary, but is actually her. It's a plan I could see working (assuming that soul-pledging actually works that way), but she sabotages her own plan by letting Gerry and the priest know that something evil is afoot. She just has to keep popping up in nightmares and jump scares to make them suspicious. Rarely do these scares accomplish anything besides filling the quota for an uninteresting horror movie. Plus Mary has inconsistent lore and powers, meaning that we never know what equals danger and death with her. Despite the film's title making her sound more consistent, the way this villain is written is quite hole-y indeed.

Morgan and Brown turn in better performances than the material deserves, and it's fun to root against the obviously-exploitative Elwes character. But "The Unholy" is too obsessed with the short-term goal of scaring audiences with pointless startles and laughable special effects rather than pulling off anything memorable. The movie wants to outrage people of faith, but it's not worth an emotion as strong as outrage. And even if you're not a person of faith, this movie isn't worth your time or money. Try to see some leftover Oscar season stuff instead.

"The Unholy" is rated PG-13 for violent content, terror, and some strong language. Its running time is 99 minutes.