I think it was a mistake to call this movie "Ocean's 8". The modern-era "Ocean's" series began in 2001 with "Ocean's Eleven", then went to "Ocean's Twelve" in 2004, and then to "Ocean's Thirteen" in 2007. Now the franchise is being relaunched with a female-led cast and a problematic title. 8 is about 73% of 11, and it just makes me think of the gender pay gap, which is usually reported to be around 75%. Without giving too much away, this team has enough unofficial members that "Ocean's Fourteen" would not have been an unreasonable title. But this film's advertising only wants to push eight actresses, so we're stuck with a film that tells you right in its title that it's an insufficient version of the movie you want.

Sandra Bullock stars as Debbie Ocean, sister to George Clooney's master criminal Danny Ocean. Danny has supposedly passed since "Ocean's Thirteen", but he was totally the kind of guy who would fake his own death, so only time will tell to see if it sticks. Debbie gets paroled after five years in prison for a scam she pulled with her no-good artist boyfriend (Richard Armitage) and immediately goes back to being a drain on society: stealing makeup, conning her way into posh hotel rooms, and planning an elaborate jewelry heist. It'll have to be a team job, requiring at least six other people. 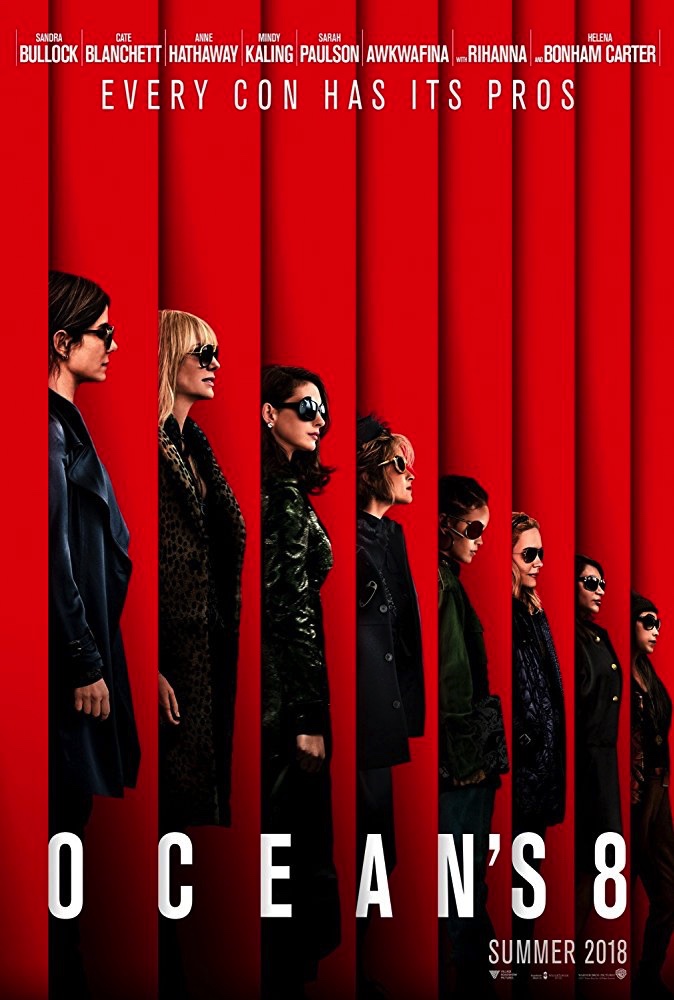 First up is Debbie's longtime partner Lou (Cate Blanchett). Lou has been conning people for so long that she's bored with it. I got the impression that the character only exists because Debbie needs to be talking to somebody during her "just got out of prison" phase. Debbie and Lou recruit suburbanite fence Tammy (Sarah Paulson), blunt hacker Nine-Ball (Rihanna), harried jeweler Amita (Mindy Kaling), lightfingered larcenist Constance (Awkwafina), and washed-up fashion designer Rose (Helena Bonham Carter). Of those five, Rose is the most interesting. She has the most backstory and we can sympathize with her as she pursues one last moment in the sun.

Together, the team plots to steal an exorbitant necklace to be worn by actress Daphne Kluger (Anne Hathaway) at the annual Met Gala. Hathaway is one of the eight actresses advertised as "Ocean's 8", but her character seems more like a mark than an actual member of the team (think Andy Garcia in "Ocean's Eleven"). Has the advertising made a mistake? Is there a secret eighth member of the team that the advertising doesn't want to give away? Maybe she counts as a team member because she's so crucial to the plan, unwitting though she may be. The answer may surprise you. It will almost definitely confuse you, but it "may" surprise you. It's been rumored that Hathaway gives a rare villainous performance in this movie, but that's an exaggeration, she's no worse than Debbie and her cohorts.

As you would expect, the heist is intricate, nail-biting, and multilayered.  Of course, if you've ever seen an "Ocean's" movie (or any movie with a heist or con job), you know there's a twist coming that means nothing is as it seems. The twist, or should I say twists, come during a sloppy sequence involving an insurance investigator (James Corden) who tries to recover the necklace. The sequence is unclear about how much time has elapsed since certain events, but given what I think is the correct interpretation, entire characters are rendered moot by the involvement of others. It also raises the question of why there is one investigation taking place when there should be two. The logistics of "Ocean's 8" are nonsensical, too many characters are idiots, and it never quite lives up to the fun of the better Clooney installments. It's not devoid of chemistry and cleverness, but there's not enough. Come to think of it, I'd estimate that there's about 8/11ths as much as there would need to be for me to recommend this movie.

"Ocean's 8" is rated PG-13 for language, drug use, and some suggestive content. Its running time is 110 minutes.