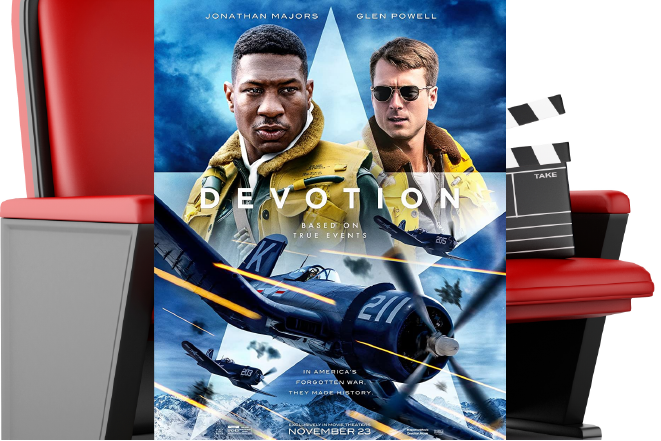 With "Avatar: The Way of Water" opening next weekend, no new wide release wanted to open this weekend and have only one week to make money before they got squashed. I've already reviewed first-place domestic box office finisher "Black Panther: Wakanda Forever," as well as runners-up "Violent Night," "Strange World," and "The Menu" in second through fourth place, respectively. As much as I'd like to revisit "The Menu" and heap on more praise, this week's review will be for fifth-place finisher "Devotion."

The film stars up-and-comers Jonathan Majors and Glen Powell as a pair of heroic Korean War fighter pilots in 1950. Jesse Brown (Majors) is the more gifted flyer of the two, but as an African-American, he's held back by the prejudices of the day. He's not completely shut out, and things are starting to turn around, especially considering his incredible skill, but there are still many that look down on him. Tom Hudner (Powell) is also a gifted flyer in Brown's unit. He's not as talented as Brown, but he's seen as more likeable, media-friendly, and promotable. He wishes there was more he could do for his superior colleague, but Brown and his wife Daisy (Christina Jackson) insist that Hudner not fight Brown's battles for him, just be there for him. Hudner spends the bulk of the movie trying to figure out how to be there for his friend without overstepping.

I'll come right out and say it - we've already had a fighter pilot movie this year with "Top Gun: Maverick," a film that may end the year as the #1 box office performer worldwide. That movie even had Glen Powell, who, between this film, that one, and playing John Glenn in "Hidden Figures" is getting quite the reputation as Hollywood's go-to guy to play aviators. The marketing for this movie has tried to push it as a sort of successor to "Top Gun: Maverick," trying to pull in audiences that made that film a hit. But it's actually having the opposite effect, making this film look like a cheap knockoff that doesn't need to be seen by audiences that have already had their fill of fighter pilots in 2022. I assure you it's no knockoff - too many talented people are putting their backs into this effort, and Jesse Brown's story most definitely deserves to be told - but it is a notch below the superior performer creatively, and that is translating into a terrible performance commercially.

Probably the biggest problem with the film is the decision to dwell too much on this portion of Brown's life. Don't get me wrong, this is obviously an important part, and no biopic would be complete without it, I'm just not sure it was a great idea to limit the film's timeline to just one year. Yes, the film centers around the friendship between Brown and Hudner, and I know the two didn't know each other until 1950, but Brown has achieved so much success already at the start of the movie that there are barely any obstacles to overcome. I think a straight-up Brown biopic would have been the way to go rather than focusing on his relationship with the frankly bland Hudner.

"Devotion" is a competent movie with dedicated performances. War movie aficionados will have a pretty good idea of what they're going to get here: bonding among the officers, family dynamics with Brown, some bullying and heated conversations about race relations, comic relief antics during a shore leave (Brown's encounter with a celebrity is a highlight of the film), and of course, tense flying sequences. It's a fine choice if you're into this kind of movie, but it can be tedious if you're all fighter pilot-ed out for a while.

"Devotion" is rated PG-13 for strong language, some war action/violence, and smoking. Its running time is 139 minutes.