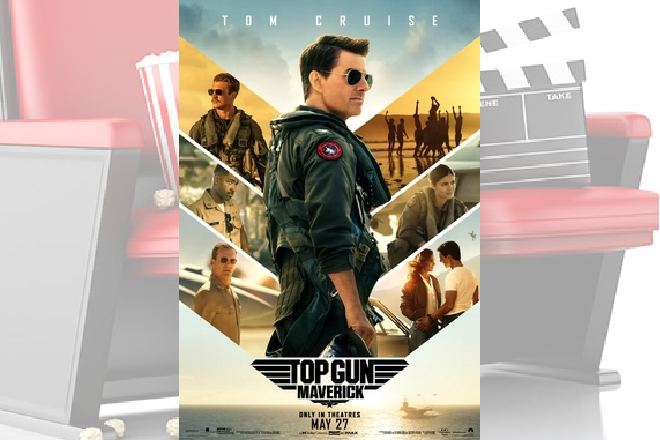 I watched the original "Top Gun" from 1986 to prepare for "Top Gun: Maverick." The aerial stuntwork and action sequences were impressive, but like many 80's movies, it fell into the trap of having a smarmy protagonist in Tom Cruise's Pete "Maverick" Mitchell. I was particularly skeezed out by a scene where he blatantly overstepped a boundary by following prospective love interest Charlie (Kelly McGillis) into a ladies' room to hit on her. Fortunately, Maverick is much better-behaved in the new movie, at least around women. He still gives his superiors headaches with his against-protocol flying style, but he's done enough growing up in the last 36 years that I can properly root for him now.

The new film opens with Maverick saving a manned Navy flying program from a drone advocate (Ed Harris) by pushing a prototype plane to Mach 10. The flight is totally reckless and the plane is destroyed, but all Maverick had to do was get it to Mach 10 in the first place, so it counts as a win. The bureaucrat wants to ground Maverick permanently over the stunt, but our hero is instead transferred to the Top Gun flight academy in California, where he is to instruct an elite group of pilots on how to take out a secret weapons arsenal on dangerous foreign soil (the exact country is unspecified, probably for the best).

The assignment is a tricky one for Maverick, because even though he requested to become a Top Gun instructor at the end of the first film, his stint didn't go well and he didn't last two months. But he understands the importance of the mission, so he teaches the young pilots the only way he knows how: by breaking all the rules, much to the consternation of his superiors (Jon Hamm and Charles Parnell). Never one to go too long without a lover, Maverick also reconnects with old girlfriend Penny (Jennifer Connelly). He's still a bit unsure of himself, and needs some words of encouragement from old friend Iceman (Val Kilmer, in a performance that sadly reflects the actor's real-life health).

The new pilots include Hangman (Glen Powell), Bob (Lewis Pullman), Phoenix (Monica Barbaro), Payback (Jay Ellis), and Fanboy (Danny Ramirez). Then there's Rooster (Miles Teller), the son of Maverick's late former partner Goose (Anthony Edwards). To say Rooster resents Maverick is an understatement, not so much for the death itself, but for Maverick deliberately setting his career back with well-intentioned motivations. But it adds a layer of tension to an already-tense mission. I would have switched a few characters around for the climactic mission, but the movie is set on a certain direction.

As always, the flying stunts are all top-notch. Cruise, as is his trademark, insisted on doing many stunts himself, and he definitely put himself through the ringer here, as did the other actors. I'm sure their motivation was that they didn't want the... "more seasoned" Cruise showing them up. I'm not sure how wise it was to subject themselves to so much motion sickness and pressurization issues, but I have to admit, their eyes are rolling back in their heads just right.

The story of "Top Gun: Maverick" isn't going to break any new ground. An unconventional instructor plays by his own rules, but at the end of the day cares deeply about completing the mission and protecting his students. He's ordered to leave one behind at one point, but we all know there is zero chance that Maverick will obey that order. The likeable characters and exciting action sequences make "Top Gun: Maverick" the epitome of a crowd-pleasing summer blockbuster. Spring for premium tickets in an IMAX/Dolby/Prime theater is you can, as this is the perfect time to make sure a movie is big and loud.

"Top Gun: Maverick" is rated PG-13 for sequences of intense action, and some strong language. Its running time is 131 minutes.