Movie Review - Those Who Wish Me Dead 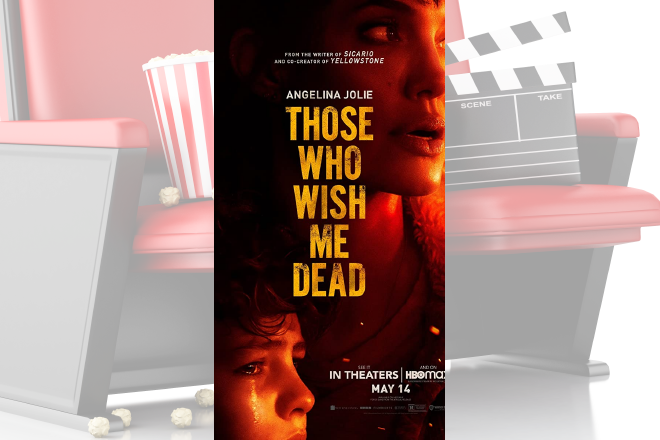 We sure have been getting a lot of these "broken adult goes on the run with endangered youth" movies lately. There was "News of the World" with Tom Hanks and Helena Zengel back in December and "The Marksman" with Liam Neeson and Jacob Perez in January. Okay, counting "Those Who Wish Me Dead" with Angelina Jolie and Finn Little, that's only three movies, but in this era, that's a lot.

The story sees Connor (Little) on the run from a pair of assassins (Aiden Gillen and Nicholas Hoult, playing brothers with the most glaring age difference since Bradley Cooper and Sam Elliot in "A Star is Born") who are out to eliminate he and his father (Jake Weber) because of the latter's knowledge of their boss (a surprise cameo)'s illegal business dealings. He meets up with disgraced former smokejumper Hannah Faber (Jolie), who agrees to help him, partly because it's the right thing to do and partly because she needs to atone for some child deaths that occurred on her watch.

The movie's advertising emphasizes fire, specifically one the assassins start as a diversion from their trail of murders. This is actually a very small part of the movie. The advertising also implies that smokejumping tactics will play a part in the action, but they really don't. We see them in a flashback to why Hannah is so haunted, and again at the end after the assassin action has passed, but cool smokejumping stunts are never in the thick of the action.

The action is never that great. Gillen and Hoult start off so smooth and professional, but get increasingly sloppy as the movie goes on, to the point where they're bumbling fools by the end. It's not exactly laughable that one gets outsmarted by the local sheriff (Jon Bernthal) and his wife (Medina Senghore) but it is laughable that the other, heavily armed, mind you, gets outsmarted by Jolie and Little. The fire-related action, especially toward the end, is marred by how much emphasis is put on the fire and not the smoke. Not only are the dangers of smoke inhalation virtually ignored, but only in a Hollywood movie with an overpaid special effects team will you see this many aggressive flames so devoid of smoke.

It didn't hit me until after the movie was over that Connor was the main character, given how much the advertising emphasizes Jolie as the lead. But then the title doesn't make sense. The bad guys want Connor dead because he's in possession of dangerous information. They need to get rid of Hannah because she's protecting Connor, but they don't want her dead so much as just gone. As a matter of fact, one of them never even meets Hannah and the other one interacts with her for all of three minutes.

I'm not sure Jolie was the best casting choice for Hannah. This is the kind of character who only works if she doesn't have great chemistry with children, so the movie can play up the contrast. Jolie is so famously a mother that it's hard to not see mama-bear instructs kicking in as Hannah protects Connor. Though I suppose it's a nice touch to see her teaching him a dirty tongue-twister to take his mind off the danger.

There's not much good or even noteworthy about "Those Who Wish Me Dead." I'm only reviewing it because it came in third place at the box office on a weekend with no new wide releases, but this movie will be quickly forgotten. Next weekend is Memorial Day, so get ready for some proper blockbusters between now and then.

"Those Who Wish Me Dead" is playing in theaters and on HBO Max. The film is rated R for strong violence, and language throughout. Its running time is 100 minutes.