Wind, high fire danger for much of Colorado Sunday and Monday

Much of the eastern Colorado plains and central mountains are under a red flag warning for high fire risk Sunday, with similar conditions expected to return Monday for at least part of the area.

Winds are predicted to gust as high as 60 miles per hour. In combination with low relative humidity, any fires that do start could spread rapidly. Humidity may fall as low as 10 percent for parts of Colorado.

The National Weather Services is cautioning against any outdoor burning or other activities that could spark a fire. The NWS also encourages reporting any fires immediately, which will give firefighters the best chance to bring blazes under control and minimize the threat to life and property.

The strongest winds are expected to be at higher mountain elevations, while the eastern plains can expect gusts to 45 miles per hour. 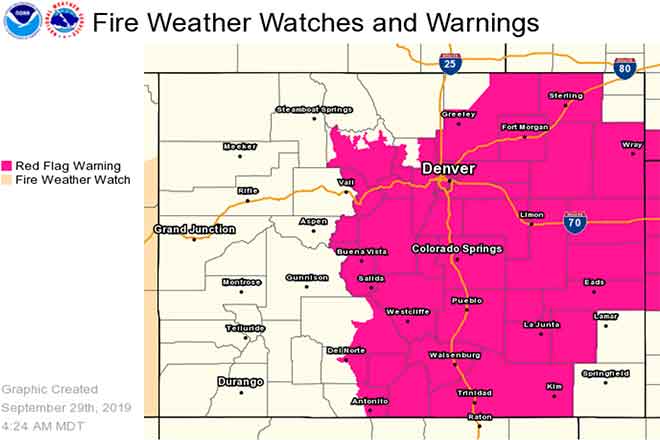 By Tuesday, temperatures at lower elevations are expected to drop back to the 50s and 60s, and the chance for rain increases, particularly for southeast Colorado Tuesday night.

Sunday's red flag warning will be in effect from noon through 7:00 p.m.

Colorado counties covered by the warning include all or portions of

Several Kansas counties along the northeast Colorado border are also included in the warning.