The illegal, unapproved relocation of fish from one body of water to another continues to cause significant problems for management agencies, water providers and ethical anglers across Colorado.

Recently joining the list of reservoirs impacted by the presence of illegally introduced northern pike is northwest Colorado'sKenney Reservoir. In the fall of 2018, Colorado Parks and Wildlife aquatic biologists confirmed the presence of the nonnative predator in the estimated 335-surface-acre reservoir located near the town of Rangely. Authorities believe the northern pike were most likely dumped illegally into the reservoir, or the White River, by a 'bucket biologist,' a pejorative term used to describe someone that moves live fish in an effort to create their own personal, unapproved fishery.

"Releasing fish unlawfully and selfishly is self-defeating and will not work as intended," said Lori Martin, CPW's Northwest Region senior aquatic biologist. "Because northern pike are indiscriminate predators and consume any fish they catch, we will not throw our hands in the air and ignore the problem. We will take action one way or another to deal with this illegal introduction because it is very harmful, and the stakes are so high. This hurt existing fisheries and it certainly has negative impacts on anglers, the majority of whom are law-abiding and ethical."

CPW says illegal fish stocking can result in fines up to $5,000 and the permanent loss of hunting and fishing privileges. In addition, anyone convicted of illegal fish dumping will likely have to pay up to hundreds of thousands of dollars to reclaim the body of water.

The presence of northern pike has prompted CPW and reservoir owner Rio Blanco Water Conservancy District and other partners, including the Town of Rangely, Rangely Area Chamber of Commerce, Upper Colorado River Endangered Fish Recovery Program and the Colorado Water Conservation Board, to initiate an angler harvest incentive targeting all northern pike found within the District's boundaries.Beginning June 1 and continuing through Nov. 30, licensed anglers can earn $20 for each northern pike caught and removed from Kenney Reservoir, the White River and other waters, from approximately Stedman Mesa to the Utah border. 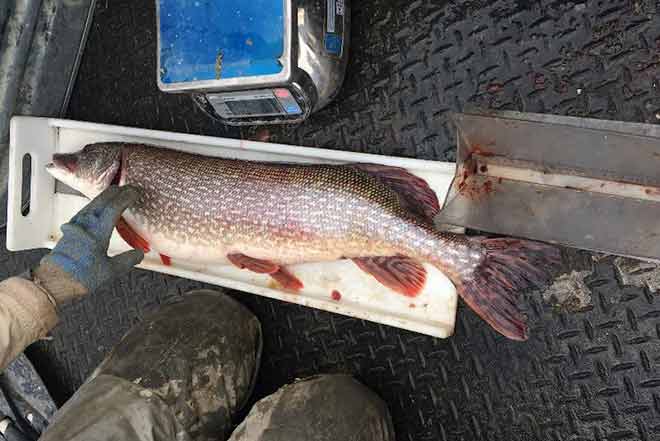 Kenney Reservoir is very popular with anglers and currently recognized as an excellent channel catfish, black crappie and common carp fishery. In addition, CPW stocks rainbow trout annually at the expense of the State of Colorado; however, due to the presence of northern pike, Martin says the agency will have little choice but to cancel the remaining catchable trout plants in Kenney Reservoir in 2019. She says until the issue is resolved, she is not sure when they can resume stocking.

"Moving any live fish is a criminal act and can cause great damage to an existing fishery, threaten our native fishes and cost the sportsmen and women of Colorado thousands of dollars annually," said CPW's Area Wildlife Manager Bill de Vergie of Meeker. "We would prefer to dedicate our time and sportsmen's dollars on other projects that directly benefit the angling public, rather than spend money and manpower on fish removal efforts."

Research conducted by partners in the Upper Colorado River Endangered Fish Recovery Programhas shown that the unapproved presence of nonnative predators like northern pike and smallmouth bass in critical, native fish habitat is among the most significant impediments to the recovery of Colorado's endangered fishes - Colorado pikeminnow, humpback chub, bonytail and razorback sucker. The rare species exist nowhere else in the world except in the Upper Colorado River Basin.

According to the U.S. Fish and Wildlife Service, the White River, upstream to the Rio Blanco Lake dam west of Meeker and downstream of Kenney Reservoir, is designated critical habitat for the Colorado pikeminnow, and the lower 18 miles of the White River in Utah is designated as critical habitat for razorback sucker. Smallmouth bass, northern pike and other nonnative species in these river stretches have proven detrimental to native fishes.

Other Northwest Region reservoirs dealing with the repercussions of unlawful stocking of northern pike include Green Mountain Reservoirand Wolford Mountain Reservoir. CPW and the Colorado River Water Conservation District initiated angler harvest incentives at both reservoirs several years ago, similar to the one planned at Kenney Reservoir. Licensed anglers can earn $20 for each northern pike caught and removed.

To participate in the angler harvest incentive within the Rio Blanco Water Conservancy District's boundaries, anglers should bring their freshly caught northern pike to the District office at 2252 East Main Street in Rangely during typical business hours, 7 a.m.- 4 p.m. Monday - Thursday, and 7 a.m.- 3 p.m. on Friday. The District will administer the cash harvest incentive with funds provided by CPW through a Colorado legislative bill that appropriates severance tax dollars to the Species Conservation Trust Fund.

For each body of water, anglers must present their fishing license to qualify for the harvest incentive.

"Our removal efforts thus far have been effective at reducing the number of northern pike in Kenney and we believe the population is still relatively small," said Martin. "But northern pike are prolific and it doesn't take long for a small population to grow, especially if no management action is taken. We encourage anglers to participate and help us eliminate northern pike from Kenney and the surrounding area. If the pike population continues to grow, we may have to resort to less palatable options for managing against northern pike in the future."

To report unlawful fish stocking anonymously, call Operation Game Thief at 877-265-6648. Rewards are available for information that leads to an arrest or citation.