Colorado's dry conditions continue to shrink – looking back at drought during 2018, and what’s next

Just four months ago, over a quarter of Colorado was in extreme and exceptional drought, the two worst categories. Today, less than one percent of the state is experiencing moderate drought, with another 15 percent - mainly in the southern mountains, seeing abnormally dry conditions.

This week's update from the National Drought Mitigation Center showed the dramatic turn-around the state has made, thanks in part to a snowy winter season and series of storms that continued in Colorado's mountains as recently as the middle of this week. Higher elevations saw an additional four to 20 inches of new snow, adding to areas that have seen up to 15 feet of snow this winter. 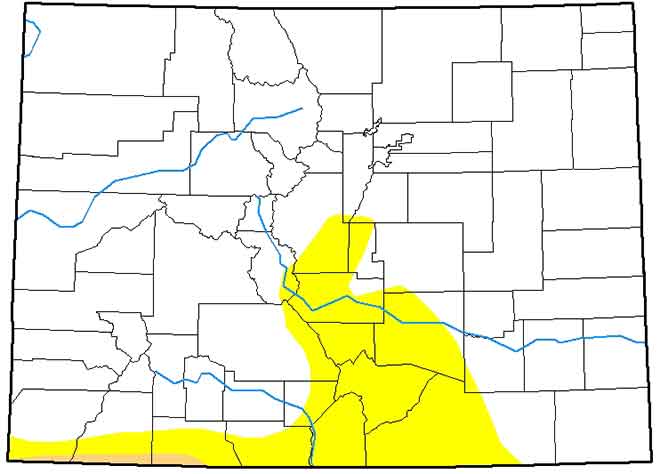 By the time the first weekly report in January 2018 was released, abnormally dry conditions covered 60 percent of the state. Moderate drought affected another 26 percent. Severe drought, at eight percent, made its first appearance and signaled the rapid decline would continue. At the end of the month, moderate drought had moved to 47 percent, and more area shifted to severe conditions, which covered 29 percent of Colorado.

At the end of February, extreme drought jumped to eight percent. With minor, short-lived exceptions, Colorado had not seen extreme conditions since 2014.

Noticeable improvements started in January this year as winter storms started to bring increased snowpack, particularly to southwest Colorado. Exceptional drought, which was already improving, fell from 11 percent to less than three percent by the end of the month, and completely disappeared by the end of February. 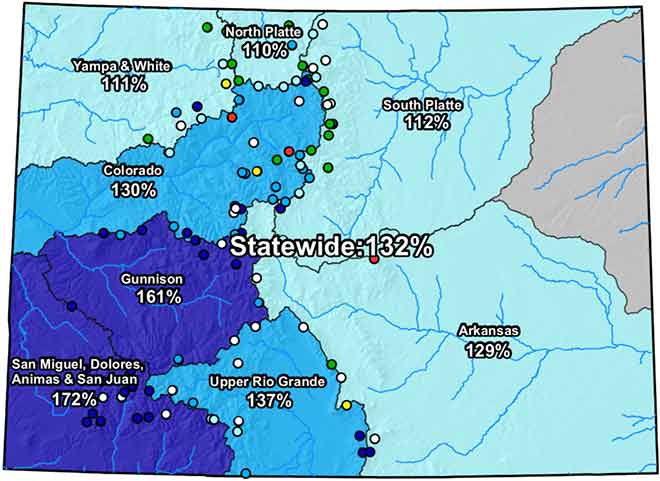 Extreme drought fell from 22 percent of the state to zero between mid-February and mid-March. Severe conditions were also dropping rapidly as a series of storms continued, and that category had also returned to zero by the end of March. The impact of the month's storms could be seen in the drought-free area of the state. With the first report for the month, 11 percent of Colorado was free from drought. The number increased to 75 percent four weeks later. 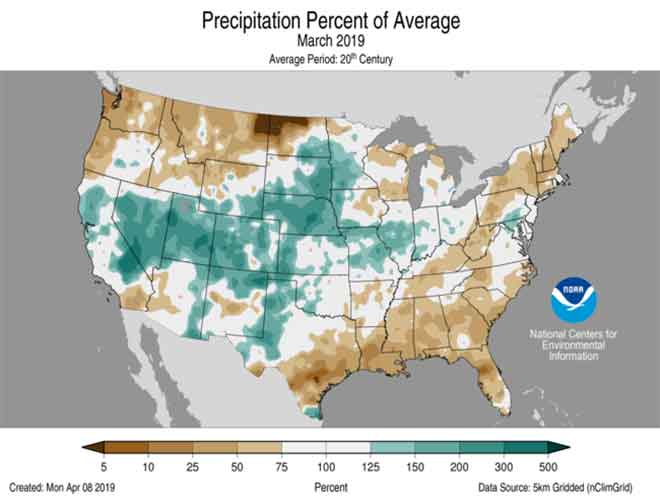 Most of the state saw precipitation at 125 to 150 percent of normal levels for the month, though a small portion of the southern mountains was below average during March.

Colorado's improvements have mirrored improvements across the continental United States. At the beginning of April, only six percent of the area was in drought, down from 12 percent in February, which the National Oceanic and Atmospheric Administration noted was one of the smallest drought footprints on record.

Despite the improvements, drought disaster designations have been made by the United States Department of Agriculture and Small Business Administration in Colorado recently.

Although the most recent period of drought saw nearly half of the state in the worst categories, other periods over the past 18 years have seen worse conditions. 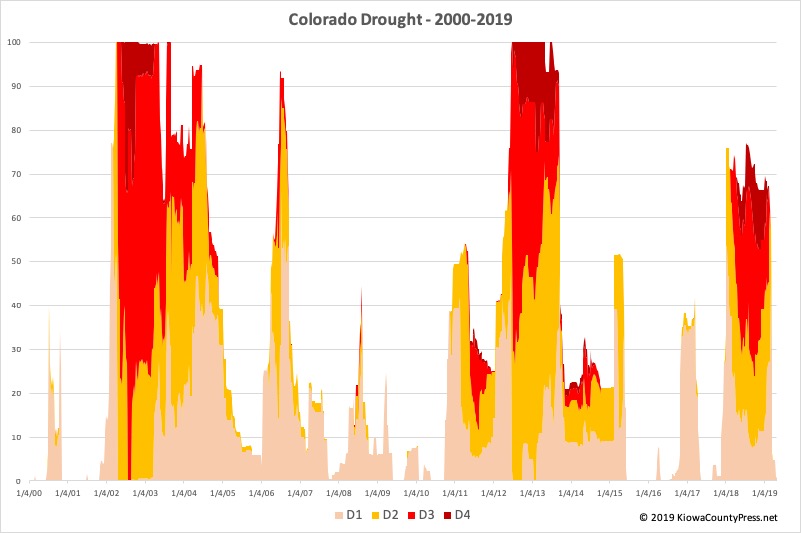 Starting in late March 2002, there were 48 consecutive weeks with 99-100 percent of the state in severe drought or worse. Over a six-week period spanning July and August, 100 percent of the state was in extreme or exceptional drought. Colorado also experienced its largest-ever forest fire that year. The Hayman Fire burned over 138,000 acres.

During 2012-2013, 70 percent of Colorado was in extreme or exceptional drought at one point, with most of the remaining 30 percent in severe drought. Forest fires were common both years. The High Park Fire in 2012 burned more than 87,000 acres, while the 2013 West Fork Complex consumed over 110,000 acres and became the state's second largest fire. The Waldo Canyon and Black Forest fires also occurred during the same span. Over 1,100 homes were destroyed in forest fires across the two-year period. 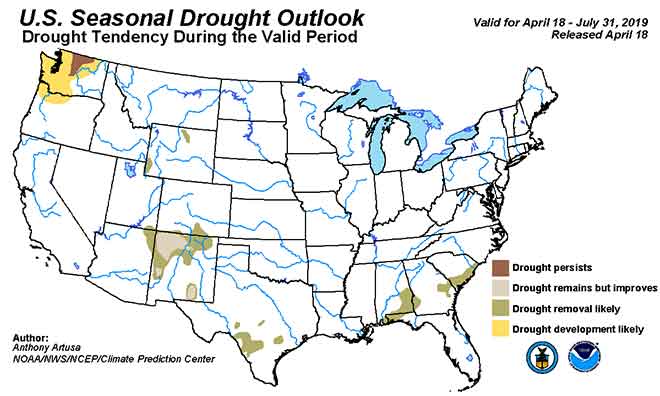 Over the next 6-10 days, Colorado is expected to be cooler than normal for this time of year. The eastern half of the state has a 70 percent chance of the below-average temperatures, while the western slope has a 60 percent chance.

Potential for precipitation is also above normal, particularly for southwest Colorado where months of regular storms have produced snowpack up to 172 percent of the median for this time of, offsetting a significant shortage at the start of the year.

Chances for cooler than average temperatures and above average precipitation continue into the following week.

Through July, CPC is forecasting potential for below normal temperatures to continue in southeast and east central Colorado, while the western third of the state may be above normal.

The next three months also including the chance for more rain than average, particularly for northwest and north central mountains.

With high snowpack and potential for a wet spring and early summer, Colorado could move from the drought of 2018 to the floods of 2019.