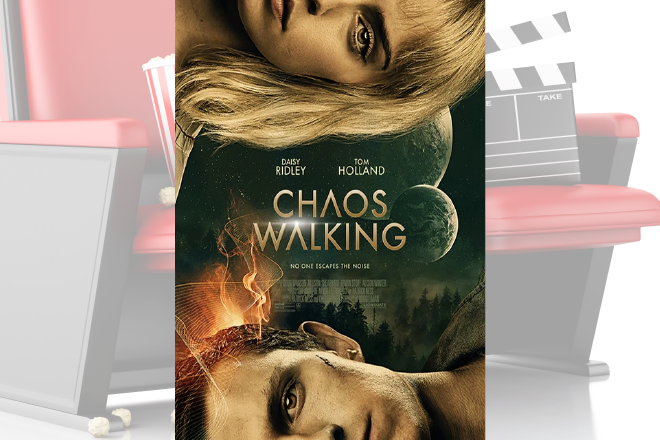 It was weird two weekends ago when the movie theaters in NYC reopened and this movie was playing on all the IMAX screens. I thought the dazzling animation (and Disney branding) of "Raya and the Last Dragon" would have put that film in such prime real estate, but for whatever reason, theaters thought "Chaos Walking" should get those slots instead. I noticed this past weekend that theaters were giving their IMAX theaters to "Tenet," as if they had more confidence in that six-month-old disappointment than either the thus-far-underperforming "Raya" or "Chaos Walking," which has been #3 at the domestic box office since it opened. The film hasn't even been able to beat "Tom and Jerry" for the last two weekends, and that movie is free to anyone with an HBO Max subscription.

The film takes place on a distant planet called New World, which is seemingly inhabited only by men. The men are subject to "The Noise," a series of audible words and holograms that convey their innermost thoughts. Most of the older and supposedly "stronger" men have learned to control their Noise so as to remain enigmatic. But Todd Hewitt (Tom Holland) is so darn young and emotional that his Noise is louder than anyone else's.

One day Viola (Daisy Ridley) crash lands on New World, the sole survivor of a scouting mission that reports back to a huge spaceship that can carry a whole population. The men of New World are of course intrigued by the visitor, with Mayor Prentiss (Mads Mikkelsen) deciding that Viola can be the community's ticket off this planet he and the men have depleted. He could just ask Viola nicely if the spaceship people would be kind enough to let them tag along when they come to rescue her, but for some reason he decides to take the villainous route and threaten Viola with violence. The kindhearted Tom rescues her from the Mayor's clutches, and he and Viola go on a journey to get her to a long-dormant crashed spaceship.

Tom and Viola form an unlikely bond, even though he has problems with his Noise, and she has never known anyone or anything outside of her spaceship, even though she has way better cardio than the outdoorsy Tom. As for his Noise, it announces his insecurities at every opportunity, though it usually relates to how unsure he is about his survival skills. A few times it lets Viola know that he thinks she has pretty hair and wants her to kiss him, but this is a PG-13 movie and that's as amorous as he's allowed to get.

The film is an adaptation of a dystopian Young Adult book series, and it would have been right at home among "The Hunger Games" and its ilk about five years ago. There's a running joke with futuristic films like these that characters with political and religious titles are always bad guys, and here we get two: The Mayor and Preacher (David Oyelowo). My theory was that one would get killed in this film and the other would be saved for an upcoming sequel. That's right, this is supposed to be a franchise, with future installments likely to flesh out characters that are underdeveloped here, like The Mayor's son (Nick Jonas, barely consequential here, though Jonas gave the best performance in 2019's "Midway"). But I don't think those sequels are going to happen. The series will probably wind up abandoned like "Divergent."

The best thing I can say about "Chaos Walking" is that it's onto something. Holland and Ridley are likeable leads, though it can be frustrating to see Spider-Man and Rey Skywalker struggle to learn the lesson that they're more powerful than they think. The Noise is a fresh idea for an obstacle to overcome ("What Women/Men Want" notwithstanding) and I thought a surprisingly high number of Noise-related jokes landed. But it isn't enough to save the film from poor pacing, predictability, and a lack of action. Maybe you're better off seeing "Tenet" on the IMAX screens after all.

"Chaos Walking" is rated PG-13 for violence and language. Its running time is 109 minutes.