Movie Review - The Kid Who Would Be King

Unless they're part of a huge franchise like "Harry Potter," live-action kids' movies are a tough sell. True, Steven Spielberg had good fortune with some family-friendly hits, and "Home Alone" and its various knockoffs did some decent business in the 90's, but the general rule is that if you want to bring in kids and you don't have a character they can recognize in the first ten seconds of the trailer, you'd better be animated. This rule leaves films like "The Kid Who Would Be King" coughing in the dust. The film opened on over 3,500 screens and made a dismal estimated $7.25 million, a record low for that big a release. The film is obviously a disaster commercially and I'm sorry to say that it doesn't fare much better creatively. 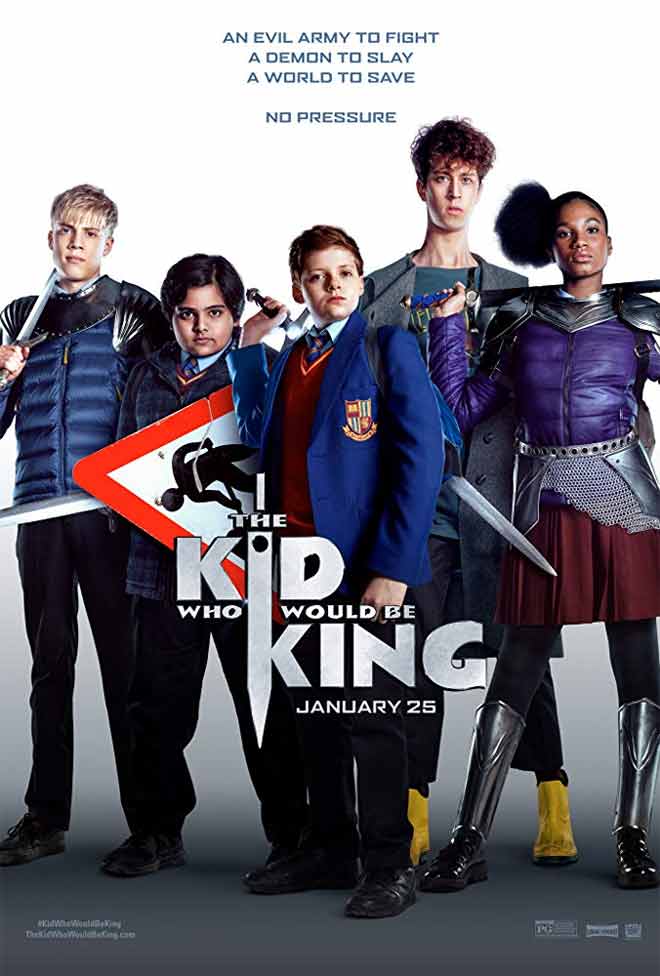 The story sees British 12-year-old Alexander (Louis Ashbourne Serkis) and his buddy Bedders (Dean Chaumoo) spending their days getting tortured by bullies (Tom Taylor and Rhianna Dorris). Alexander just wants to stay out of trouble, but Bedders is so annoying and punchable that he has to be rescued by his friend at least once per day. Alexander is rewarded when, during a routine fleeing, he happens upon a construction site and is able to draw a sword out of a stone because he's noble and worthy. The sword is of course Excalibur, and this means that Alex is now tasked with saving the world from the evil sorceress Morgana (Rebecca Ferguson). He's told all of this by a teenaged Merlin (Angus Imrie), who shows up at school insisting on his attention, causing his social status to plummet even further.

Alex reluctantly agrees to the quest, even enlisting the help of the bullies once they find out that Merlin, magic, and the danger are real. The pack ditches Alex's well-meaning mother (Denise Gough) and treks north to the small village where his father reportedly battled demons. Adults, you've got about an hour of teeth-gritting to get through before he realizes that they aren't talking about literal demons. The kids learn lessons about chivalry and loyalty and empathy, there's a dumb fake-out battle with Morgana, and then for roughly half an hour there's a slightly better battle, but not one that justifies all the time you're wasting.

My list of complaints about this movie is long, from the bad lighting in certain scenes to the script forgetting to give Dorris's character anything to do for long stretches of time to the way the characters in this kids' movie pull weapons on each other way too casually. But perhaps my biggest complaint is with the acting. Serkis gives one of the stiffest lead performances I've ever seen and Chaumoo and Ferguson seem to have been coached to wheeze as much as possible while delivering their lines. It doesn't help that they're working with bland, unnatural dialogue, but they could give it more life than they do.

"The Kid Who Would Be King" currently holds an 86% approval rating on Rotten Tomatoes, I suspect because of its climactic battle, a "Home Alone"-style sequence where schoolchildren battle flaming skeletons, which sounds cool until you realize that Morgana has chosen to use henchman with almost zero structural integrity. The movie has its heart in the right place with messages of courage and perseverance, and I laughed at some of the bits with Merlin (Imrie has an impressive little ritual he does when casting spells), but is it ever a slog. If you want a better live-action kids' movie, go see "A Dog's Way Home," now in its third weekend. It's by no means great, but the families at my screening clearly enjoyed it, whereas there weren't any families at "The Kid Who Would Be King," I suppose because everybody could tell it would be a bomb.

"The Kid Who Would Be King" is rated PG for fantasy action violence, scary images, thematic elements including bullying, and language. Its running time is 120 minutes.