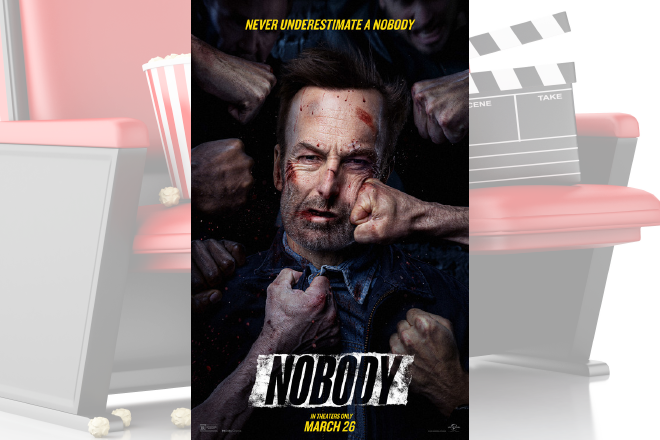 NOTE: This review is coming from a person who loves a good violent action movie. If the genre isn't for you, this movie isn't for you.

"Nobody" wears its resemblance to the "John Wick" movies on its sleeve. David Leitch, director of the first "Wick" film, is a producer for this movie, and the advertising hasn't been shy about playing up that connection. Like the "Wick" series, this movie takes place in a world of sophisticated gangsters and assassins. I'd say it could be a shared universe, but the characters in this movie use gold bars and paper money (which can be burned dramatically) for currency instead of those cute doubloons, so... not the same.

Bob Odenkirk stars as Hutch Mansell, a seemingly-lame suburban dad who is stuck in a rut. He's unhappy in his job working for his father-in-law (Michael Ironside), his wife Becca (Connie Nielsen) isn't affectionate, and everybody thinks he's a wimp, including his own son Blake (Gage Munroe). When a pair of burglars break into his house and assault Blake, nobody is surprised that Hutch takes a path of inaction and lets them get away. The official word from the police is that he did the right thing, but even some of the officers think he should have taken more steps to protect his family, to say nothing of his neighbors, co-workers, and Blake.

Hutch lets people know that he's a former "auditor," which people assume means a boring accounting job, but actually means highly-trained assassin. He hasn't tapped into that particular set of skills (did you think I was going review a movie about an assassin in his late 50's and not make that reference?) for a while, but against the advice of his brother Harry (RZA), he's compelled to do so in the name of catching the burglars. The results of the investigation prove disappointing, and he's left wanting to take his anger out on somebody. Fortunately some Russian mobsters happen upon the bus he's riding and start harassing a young woman. The good news is that he's able to put them in the hospital guilt-free, satisfying his bloodlust. The bad news is that one of them is the brother of the powerful, dangerous Yulian (Aleksei Serebryakov), who vows revenge on Hutch.

From there, the movie is pretty standard action movie fare. Yulian's men pay a visit to Hutch's house, and Hutch unleashes the full power of his background. The henchman try to get to Hutch through his elderly father (Christopher Lloyd), but that doesn't go well for them either. Hutch sends a message to Yulian through his stronghold of money, which destroys his reputation and career. The two are set for an epic confrontation where Yulian brings an army to a metalwork factory, which Hutch has tricked out "Home Alone"-style. The fight is about 50-1, and we know that things can only end badly for at least 49 of the 50, and probably all of them unless someone really wants to save cool villain Yulian for a sequel.

My on-the-spot reaction to "Nobody" was to call it "sporadically awesome." I loved the extended fight scene on the bus, the attack on Hutch's house, the attack on Hutch's father, the final showdown, and scenes where Hutch tries to intimidate people with varying degrees of success. But the rest of the movie is familiar "assassin gets dragged out of retirement" territory. At one point, Hutch goes to get help from a character called "The Barber" (Colin Salmon). A character in an assassin movie named after an innocuous occupation - never seen that before. Stuff like that makes the movie seem hacky and unoriginal. What does make the movie seem original is the performance from Odenkirk, the former sketch comedy player turned dramatic actor turned historical actor (my mind was blown when he showed up in "Little Women") now turned action star. He's shrewdly cast as the last guy you'd expect to be dangerous. In other words, he's somebody who makes the perfect "Nobody."

"Nobody" is rated R for strong violence and bloody images, language throughout and brief drug use. Its running time is 92 minutes.