EarthTalk – What have we learned from recent storms about protecting coastal cities?

What have we learned from storms like Katrina, Sandy and Harvey about protecting our coastal cities better from the warming-intensified major storms hitting them?

Major storms like Katrina, Sandy and Harvey were devastating to local populations and reformed the landscapes of the regions where they made landfall. They also changed the way we think about--and design--our coastal cities. Let's hope we've learned about where (and where not) to site habitable buildings as well as the importance of maintaining--even expanding--natural buffers that protect the places where people live from unnecessary property damage and/or loss of life.

New York City has gotten busy bolstering itself against future "super storms" like 2012's Sandy. Code changes like requiring electrical transformers to be in the upper floors (not basements) of commercial buildings, and developing feasible strategies for shuttering tunnels, airports and subways, are just a few of the changes wrought by Sandy. 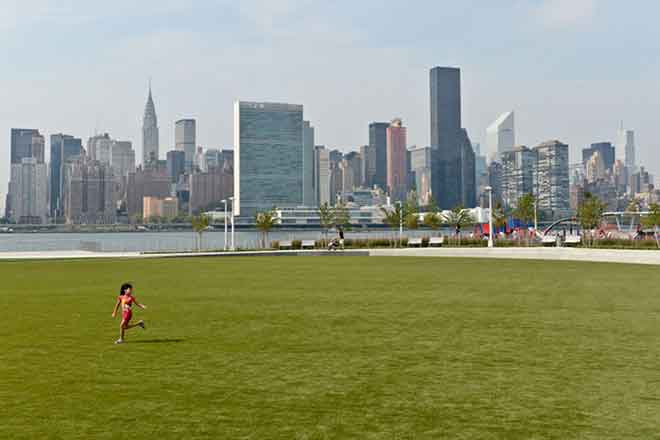 One especially climate-resilient feature of NYC's new Hunter's Point South Park is a big playfield made of synthetic turf that can "detain" a half million gallons of water when the East River overflows during a high tide or storm surge. Credit: NYC Parks.

Developing resilient infrastructure is another way that city planners are hoping to mitigate future flooding issues, like at the recently opened Hunter's Point South Park along the East River in Queens. One especially climate-resilient feature of this park is a big playfield made of synthetic turf that can "detain" a half million gallons of water when the East River overflows during a high tide or storm surge. When the tide goes back out--or the storm moves on--the detained water is slowly released back into the river through a network of exfiltration channels hidden beneath landscape features. An outer wall protects natural barrier marshes that filter water and can also absorb and detain more stormwater as needed.

It was surprising just how walloped New Orleans was by Hurricane Katrina in 2005, given that the city's leaders and residents were used to regular flooding during storm events. But the damage, displacement and loss of life from this "100-year-storm" event spurred long overdue efforts to bolster the city's defenses against floodwaters--including efforts to conserve and expand outer marshlands which serve as

buffers against storm surges and flooding.

New Orleans also bolstered its infrastructure and capacity to handle flood waters. "Given similar evacuation conditions to those seen in Katrina, the [new] system is expected to reduce potential loss of life by as much as 86 percent without pumping and up to 97 percent with 50 percent pumping for a 100-year flood event," reports Wolfgang Kron of insurance giant Munich Re. He adds that New Orleans' post-Katrina flood mitigation system should reduce property damage by 90 percent for a 100-year flood event and 75 percent for a 500-year event, compared to the pre-Katrina situation. While New Orleans hasn't been tested on such a major scale since Katrina, everyone is hoping the projections bear out when the next major storm hits.

As for lessons learned from 2016's Hurricane Harvey, it's too soon to tell, as many Houston-area residents are still in recovery mode. But no doubt some of the lessons from Katrina and Sandy will be applied in Houston and other coastal cities around the world getting ready for rising sea levels and more extreme flooding and storm surges as global warming heats things up.