Movie Review - Life of the Party

For those of you who think I spent too much time last week whining about "Overboard" not being funny, just a heads up that "Life of the Party" this week is going to be more of the same. It's no surprise that neither movie is any good, their studios sent them out to die against "Avengers: Infinity War". Both comedy bombs lucked out because that movie got moved up a week at the last minute, so they got to open on weekends when people had already seen the superior blockbuster. They still got crushed, just not as badly. Anyway, at least this movie doesn't have the incredibly uncomfortable bits about exploiting a character with amnesia, so it's got that in its favor.

Melissa McCarthy stars as Deanna, a doting wife and mother who gets dumped by her contemptable husband (Matt Walsh) for a snooty real estate agent (Julie Bowen) as soon as they drop their daughter (Molly Gordon) off at college. When I say "as soon as they drop their daughter off," I mean while they're still in the car so she can have a public meltdown. The film clearly didn't want to pay for another set, so it rushes this scene. I suppose I should be grateful that this scene is rushed, because others go on forever, but two wrongs don't make a right. 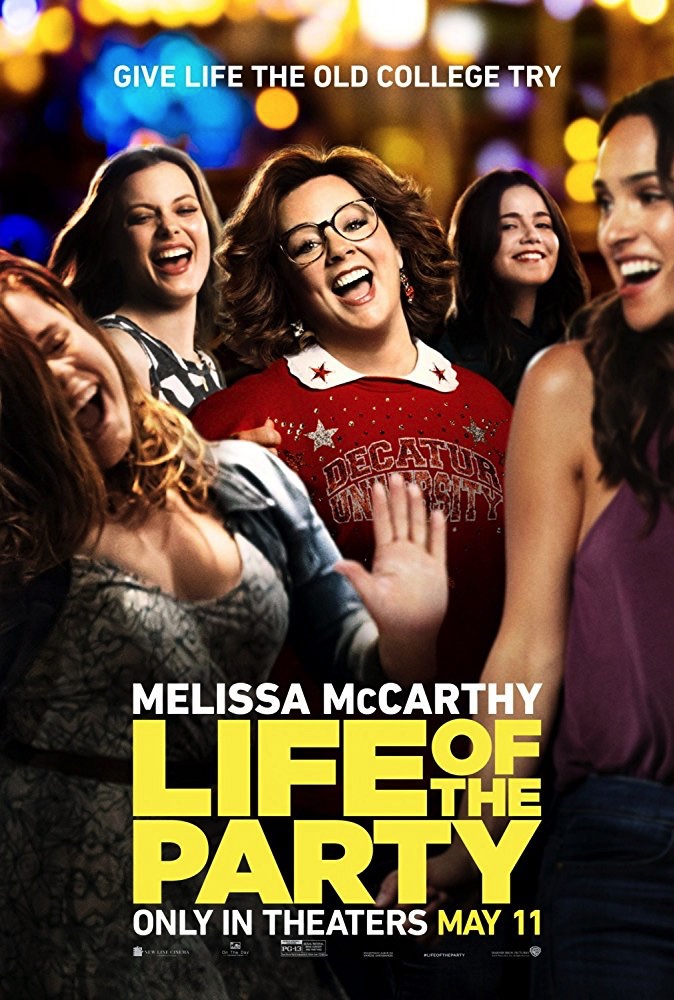 Deanna decides that the best way to cope with the divorce is to go back to college and get the year of credits she needs to finally get her Archeology degree. She at least has the good sense not to move into the sorority house where her daughter lives, opting instead to room in a dorm with a brooding introvert (Heidi Gardner). But she's still an embarrassing presence around campus and visiting at the sorority house, living up to all sorts of "mom trying to fit in with young people" stereotypes like misusing slang, cracking lame jokes, wearing inappropriate clothing, and generally sticking out like a sore thumb. And when she makes a faux pas, she never just says "Excuse me" and moves on, she has to compound her folly with endless rambling as she tries in vain to turn the situation around.

Deanna goes through various adventures, few of which are funny and most of which are painful. She makes friends with her daughter's friends, one of whom is played by Gillian Jacobs, cast because someone thought putting her in a college movie would automatically bring in fans of "Community". She attends a mediation session where she and Bowen take personal swipes at each other through the mediator while her best friend (Maya Rudolph) squawks out-of-context legal terms. She has to give an oral presentation in class and freaks out from stage fright, to the point where her innocuous professor (Chris Parnell) comes off as mean for not just pulling the plug on the traumatic experience. And as one would expect, she goes to a number of parties, one of which sees her hook up with a younger student (Luke Benward) who pursues a relationship. As off-putting as that storyline can be, it is responsible for the very few laughs I got out of this movie, especially during a scene in a restaurant.

"Life of the Party" is directed by Ben Falcone, McCarthy's real-life husband. The two previously worked together on the critical flops "Tammy" and "The Boss", and this movie doesn't have Kathy Bates and Tyler Labine to save it. Watching the film, I had the snarky thought that scenes go on too long because Falcone was too afraid to say "Cut!" to his wife. But upon further reflection, I've decided to go with the more optimistic approach that Falcone is so in love with McCarthy that he honestly finds everything she says funny and thus never wants to say "Cut!" That's sweet, but both McCarthy and the movie could have used some tough love from a director with higher standards, because what we're getting just isn't working.

"Life of the Party" is rated PG-13 for sexual material, drug content, and partying. Its running time is 105 minutes.